A weekend over the Bighorn Mountains had the Pioneers slated with a pair of doubleheaders as Powell took on Sheridan on Saturday and Buffalo on Sunday.

The Pioneers dropped both contests to … 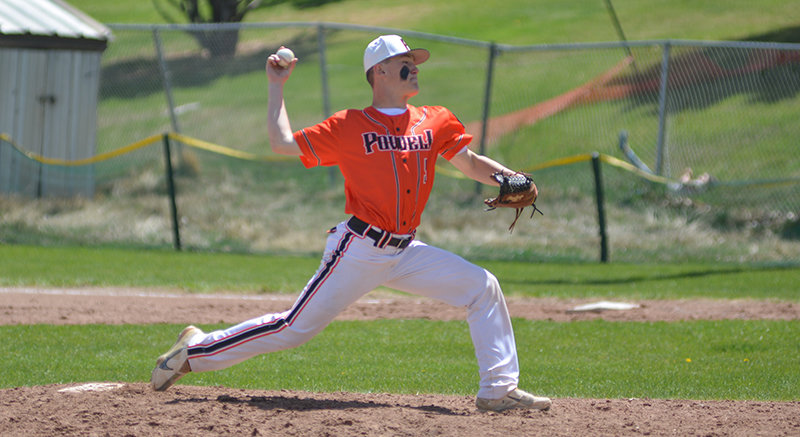 Looking to rebound from two losses on Saturday, Jhett Schwahn took to the mound on Sunday as the Pioneers defeated Buffalo in a doubleheader. The Pioneers now head to Jackson to take part in a tournament against four opponents this weekend.
Photo courtesy Alex Hargrave, Buffalo Bulletin
Posted Thursday, May 19, 2022 8:20 am
By Seth Romsa

A weekend over the Bighorn Mountains had the Pioneers slated with a pair of doubleheaders as Powell took on Sheridan on Saturday and Buffalo on Sunday.

Starting out the weekend the Pioneers made the trip over the mountain to Sheridan to take on the AA Troopers in a tough early season test.

Sheridan started the game strong, as they got two early runs in the first inning on Pioneers ace Brock Johnson on a walk and a sacrifice fly.

Powell got a run back in the top of the second, as Aiden Greenwald drove in Cade Queen who had reached on an error earlier in the inning.

Continuing to compete against one of the top teams in AA, the Pioneers got a tying run in the top of the fourth inning.

Dalton Worstell brought in Trey Stenerson on a fielder’s choice after Stenerson got on base through a double to lead off the inning.

With the ballgame tied at 2-2 the Pioneers were hanging tough with a team expected to contend at the AA level.

Then the bottom half of the fourth inning came.

“We just kind of had one snowball like we do every now and then,” Pioneers Manager Jason Borders said. “They are good hitters. They got three hits mixed with walks and it got away from us a little bit.”

The Troopers put seven runs on the board in the fourth to pull away from the Pioneers 9-2.

After that fourth inning the Pioneers only mustered one hit, and the Troopers added one more run in the fifth to make the final score 10-2.

Heading into the second game the Pioneers were looking to regroup and come out with a victory.

Stenerson started on the mound for the Pioneers, and surrendered one early run.

Stenerson was pulled early after 15 pitches, and was replaced by Worstell.

He surrendered one more run in the first, as both teams struggled offensively after the first.

Jhett Schwahn picked up what would be the Pioneers only hit of the game to lead off the top of the fourth, as the offense struggled.

Sheridan added another run in the bottom half of the fourth. The final score was 3-0.

Worstell pitched the remainder of the game after replacing Stenerson, which Borders felt was important this early in the season.

“When you lose your starting pitcher early you figure you are going to have to throw three more guys to get through that game,” Borders said. “We didn’t have to and that was big for us. I was super proud of Dalton [Worstell] for what he gave us in that game.”

Both teams combined for only six runs, as the Pioneers dropped a fourth straight game heading into Buffalo.

A short trip south to Buffalo met the Pioneers on Sunday, as very different results helped spark the offense.

It took only two batters for the Pioneers to get on the board as a Ryan Cordes single followed by a Schwahn single made it 1-0.

Stenerson brought in Schwahn, and later scored when stealing home, making it 3-0.

Cole Fauskee capped off a strong first inning when he drove in three runs on a triple to make it 6-0.

The Pioneers continued the momentum into the second inning, driving in 10 more runs to make it 16-0.

Buffalo got on the board in the third inning. They drove in three runs to make it 16-3.

Nathan Feller added another on a single in the top of the fourth to make it 17-3.

The Pioneers added four more runs at the top half of the fifth to make it 21-3, and the game was called for a mercy rule after the bottom half of the inning.

Stenerson finished 3-5 and drove in six runs, as the Pioneers wracked up 15 hits to breeze past Buffalo in the first game of a doubleheader.

Starting off the second game much like the first, the Pioneers put four on the board early as they took a 4-0 lead into the second.

Buffalo scored two runs in the bottom half of the second, the only two runs the Pioneers would surrender.

Queen scored in the top of the third on a passed ball, as he used strong base running after a single to find a run to make it 5-2.

The Pioneers were unable to get a mercy rule in the contest, but added two in the top of the seventh to make the final score 12-2.

The Pioneers now travels on the road to take on tough competition once again. The team travels to Jackson for a tournament on Saturday and Sunday.

Powell kicks things off on Saturday at 11 a.m. in a matchup against AA Rock Springs.

The next matchup comes after a short break, as the Pioneers face off against Gallatin based out of Bozeman, Montana, at 3:30 p.m.

Borders said he is intrigued by this matchup because Gallatin constantly competes for state championships in Montana and should be a real test.

On Sunday, the Pioneers get an early preview with Cody, as Powell squares off with the Cubs at 2:30 p.m.

“It will be nice to see them early before we get to play them in a conference game,” Borders said.

Powell will then get another conference opponent preview when they face Green River at 4:45 p.m. to close out the tournament.

Heading into the tournament Borders is hoping his team can find consistency on offense. He feels pitching has kept the team in games but the team has fallen short with run support in most games.

Borders is hoping the team continues to figure out each area early in the season as the Pioneers head into a tough Jackson tournament.

Back-to-back: Smith named 3A girls’ Coach of the Year