Angela Johnson announced her intention to run for Park County Commissioner in the upcoming 2022 election.

Johnson has served as clerk treasurer for the town of Meeteetse since 2003. 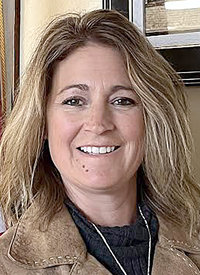 Angela Johnson announced her intention to run for Park County Commissioner in the upcoming 2022 election.

Johnson has served as clerk treasurer for the town of Meeteetse since 2003.

In addition to 22 years of experience in the appointed position, Johnson cited nearly two decades overseeing governmental budgets, problem solving and public service as qualifications for serving on the commission.

“I like to utilize my public service,” said Johnson. “I think when you become a public servant, it is a lifetime position.”

She said the number one problem facing Park County today is the land-use plan.

“Planning for the future while still maintaining our western heritage and way of life,” she said, are key priorities. “I would say it’s planned growth.”

Johnson continued: “Things will change, but it would be better if it were planned so it will benefit the county as a whole,”

A lifelong Republican and mother of three, Johnson has served in appointed and elected positions for many years.

In a press release, Joe Tilden, a current Park County commissioner, referred to Johnson as an “independent thinker of local and state government.”

Tilden confirmed he is endorsing Johnson for commissioner.

“It’s gonna be a tight race,” Tilden continued. “Now that Scott’s [Steward] entered. I think he’d make a great commissioner, too. He’s been a great sheriff for 12 years now.”

Johnson, who describes herself as “sort of a paper nerd,” said she researches subjects thoroughly before making decisions.

“I’m excited to serve the county,” she said.