A weekend full of home basketball saw the Panther girls’ basketball team make a run to the Big Horn Basin Classic championship game, falling just short of the title to 3A northwest foe … 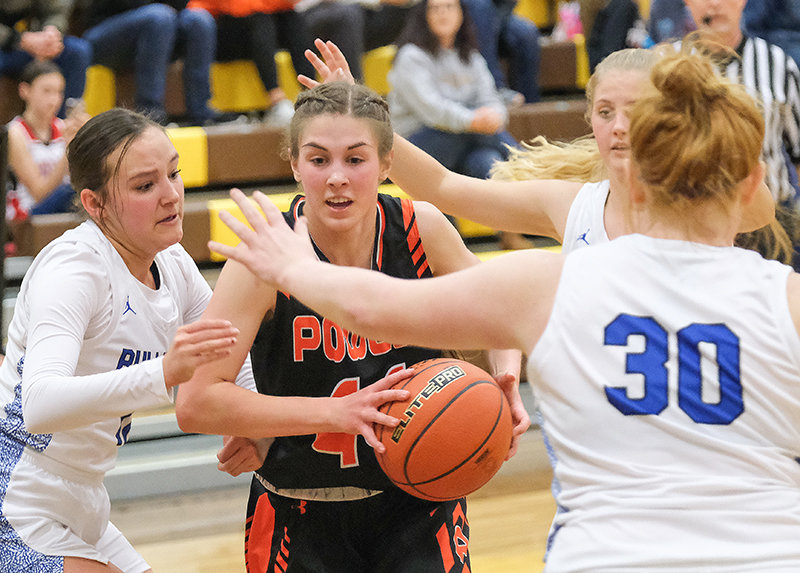 PHS junior Megan Jacobsen drives into the paint as three Lovell defenders collapse onto her. Jacobsen and the Panthers fell to the Bulldogs in the championship game, but went 3-1 overall in the Big Horn Basin Classic.
Tribune photo by Seth Romsa 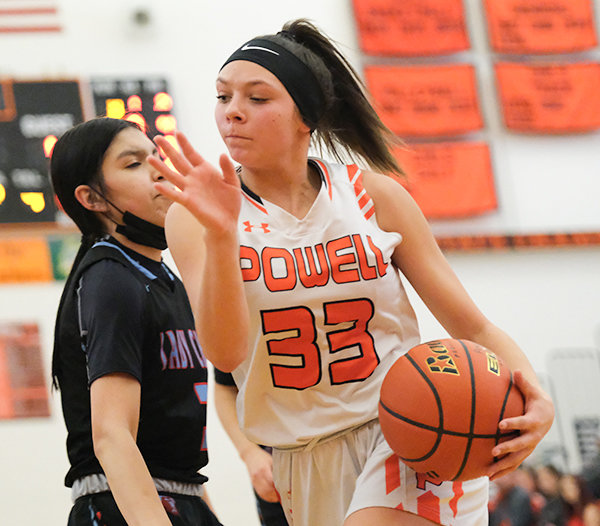 PHS freshman Catelynn Floy navigates past a Wyoming Indian defender during their semifinal matchup on Saturday. Floy finished with a game-high 19 points to help push the Panthers past the Lady Chiefs.
Tribune photo by Seth Romsa
Previous Next
Posted Tuesday, January 18, 2022 8:10 am
By Seth Romsa

The first game of the weekend brought Burlington (7-3) — the No. 3-ranked team in Class 1A — to the Powell High School gym on Friday.

The Panthers (5-4) came out energized on both ends of the floor as they battled back-and-forth in the early goings to a 9-9 score with 2:30 remaining in the first period.

The Panthers then used an old fashioned 3-point play on a fast break basket by freshman Catelynn Floy to spark a 9-2 run over the final two minutes of the quarter. It was capped by a deep 3-pointer from junior Maddie Campbell, which banked in just before the buzzer.

In the second quarter, the Panthers built a 10-point lead on a 3-pointer from sophomore Waycee Harvey, who was the game’s leading scorer. She finished with 15 points on 5-of-11 shooting from the field.

Powell built its lead to 25-13 with just under five minutes left in the half, and, after a three-minute scoring drought, PHS entered halftime with a 28-17 lead.

However, Burlington came out with a 5-0 run in the third quarter to pull within six points, forcing a timeout from the Panthers.

PHS responded with an 8-0 run of its own to extend the lead back out to 13 points, at 35-22; then Burlington scored 10 straight to make it 35-32 early in the fourth quarter. However, the Panthers’ bend but don’t break attitude on defense helped keep the Huskies at bay.

“I feel like our defense is one of our stronger suits,” Panther girls basketball head coach Chelsea Buher said. “We’ve been doing better moving our feet, being in help side and communicating on screens.”

Powell put away the game in the final minute as they outscored the Huskies for an opening round 43-36 victory.

The final Friday night game featured the Panthers against 2A Wind River (0-11). With a victory, Powell was set to advance to the semifinals the next day and the team came out firing.

The Panthers used a high press to force early turnovers against Wind River, leaping out to a 13-2 lead in the first five minutes. That lead only grew as the Panthers continued to attack in the second period and took a 30-8 lead into the half.

The second half went very much like the first half, as the Panthers cruised to a 62-17 victory.

Campbell led the Panthers with 16 points, followed by junior Megan Jacobsen with 13, Floy with 11 and senior Kaili Wisniewski had a season high 10 in the victory. Campbell also added nine steals and seven assists.

Heading into Saturday, the Panthers faced off in the semifinal against one of the toughest opponents in 2A: No. 1-ranked Wyoming Indian (11-2).

The Panthers won the opening tip and tried to score immediately. Campbell missed the floater, but chased down an offensive rebound and set the tone for the game.

“We have been putting focus on our game goals and for the girls to be more aggressive on the rebounds so that we can get more than ‘one and done’ each possession,” Buher said. “Getting offensive rebounds either gives you multiple attempts to score or puts you at the free throw line, which in turn helps to dictate the momentum of the game.”

The Panthers faced an early press from Wyoming Indian, which gave Powell multiple opportunities to get out on the break after beating the press.

A basket plus a foul and free throw by Jacobsen gave the Panthers an 11-2 lead midway through the first quarter.

The two teams battled back and forth the rest of the first quarter, with Powell leading 17-10 going into the second. The second period continued that battle as the Panthers led 25-17 at halftime.

Despite Wyoming Indian coming out of their press, the Panthers began turning the ball over in the third quarter which gave Wyoming Indian multiple opportunities to get back into the game.

Powell maintained a 10-point lead at 34-24 with 3:07 remaining in the third quarter before Wind River pulled within six. But the Panther defense again did not break.

The Powell girls outscored Wyoming Indian 11-5 in the fourth quarter to win 45-33 and advance to the final.

Floy led the Panthers in scoring with a 19-point and eight rebound performance on 8-of-14 shooting.

Playing their fourth varsity game in two days and the program’s 12th game of the week, the Panthers ran into a familiar opponent in 3A northwest foe Lovell (9-2) in the championship game in Cowley.

That wear and tear caught up to the Panthers early as they failed to stop the ball in transition multiple times. They trailed the Bulldogs 8-6 after the first quarter.

“I do feel like fatigue started to set in and when that happens, your thought process and communication just isn’t as good as you’d like for it to be,” Buher said. “Having a third team in the tournament meant we had nine games in two days, along with our freshmen having three during the week.”

Lovell’s defense and pressure led to 23 turnovers by the Panthers, as they were outscored 16-6 in the second period and trailed 24-12 at halftime.

Powell looked to gain a little momentum early in the second half, scoring five quick points to bring the game closer. However, Lovell responded, pulling away to beat the Panthers 46-35.

“Lovell is a team that will always come in and put their best foot forward when they play us,” Buher said.

Jacobsen led the Panthers with 15 points, as the team had a different top scorer in every game on the weekend.

“Each game I felt as though we had a different player stepping up and have a great game,” Buher said. “Now we just need to each bring our best game on the same night consistently.”

After finishing up the tournament season, the Panthers will open 3A Northwest Quadrant play at 5:30 p.m. Friday, facing Lander at home. PHS will follow that up on the road at Worland on Saturday at 2:30 p.m.

The Panthers are fast approaching their win total of six from a season ago, and Buher is hoping they can continue the momentum they built during the non-conference part of the schedule and carry it into the next phase of the season.