Winter break left the Trapper men’s basketball team’s shooting out in the cold, as a poor shooting streak continued into opening week of Region IX North play. Northwest dropped to 0-2 to … 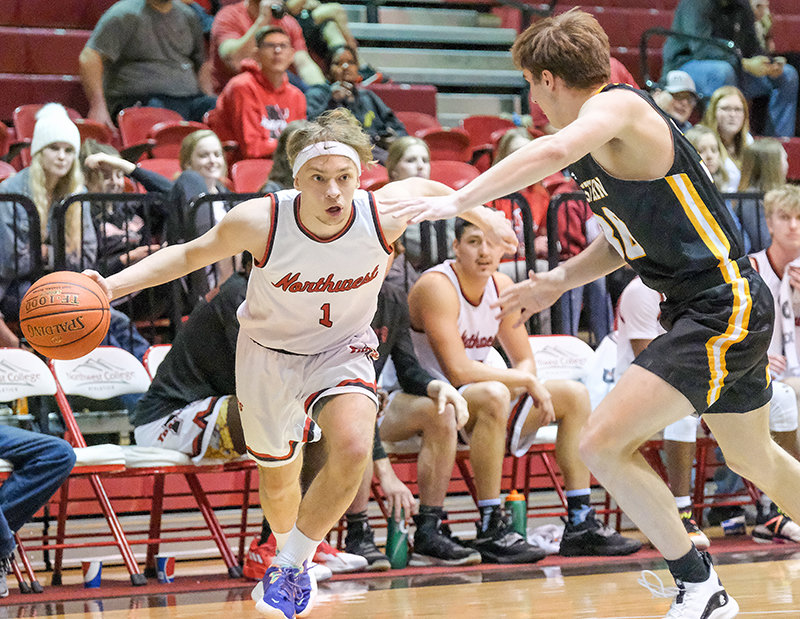 NWC sophomore Andre Loigu drives baseline as he tries to help the Trapper men rally against Eastern Wyoming in the second half on Saturday. The Trappers will head back on the road to take on Western Wyoming on Thursday and LCCC Saturday before returning home next week.
Tribune photo by Seth Romsa 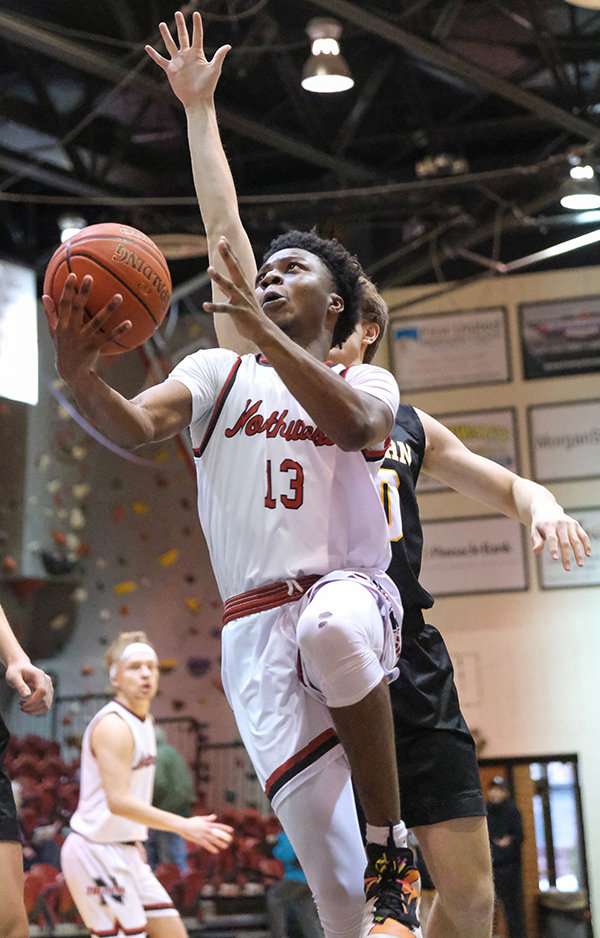 Trapper sophomore Oluwaseyi Oyeku tries to finish with the right hand as a trailing Lancer defender goes for a block. The Trappers started 2022 shooting cold, dropping their fourth consecutive game on Saturday to Eastern Wyoming.
Tribune photo by Seth Romsa
Previous Next
Posted Thursday, January 27, 2022 8:05 am
By Seth Romsa

Winter break left the Trapper men’s basketball team’s shooting out in the cold, as a poor shooting streak continued into opening week of Region IX North play. Northwest dropped to 0-2 to start the region schedule with losses to Casper College and Eastern Wyoming Community College.

Northwest started the game slow, trailing 12-6 after the first four minutes. The Trappers pulled within 12-10 a minute later — off a Juan Pablo Camargo fadeaway at the free throw line — but that was the closest the Trappers got the rest of the contest.

Casper went on a 12-4 run over the next three minutes to extend the lead to double digits at 24-14.

Northwest pulled within single digits multiple times over the next three minutes, but were never able to make a serious dent in the deficit, as Casper always kept the game at least two possessions apart.

“We have not made shots and I do not think our ability to defend is where it needs to be,” Trapper head coach Jay
Collins said.

Northwest came out in the second half on a 19-7 run with a pair of Bryson Stephens free throws cutting the Casper lead to single digits with 14:10 remaining. But Casper responded with a 9-1 run. A Gabriel Gutierrez 3-point play helped stop the run, making it a 75-62 game with 11:10 remaining. And an Alex Avila 3-pointer at the top of the key made it 81-72 with 7:43 left. However, the TBirds pushed the lead back out to double digits the next time down the court, and never let the Trappers get any closer the rest of the game.

Five Trappers reached double digits. Gutierrez and Avila led the way with 15 apiece, followed by Camargo with 14 and Stephens and Oluwaseyi Oyeku with 10 each.

After cold shooting on Wednesday night, the Trappers came home and started out strong Saturday night.

Playing against Eastern Wyoming (12-9 overall, 2-0 Region IX North), the Trappers started 3-of-5 from 3-point range and trailed 11-9 after the first four minutes.

The two teams continued to battle. Northwest took its only lead of the contest at 16-15 off a Camargo jumper with 12:39 remaining.

The Lancers answered over the next three minutes with an 8-2 run, as their ability to get to the rim mixed with 3-pointers gave Eastern Wyoming the chance to score at each level.

After taking the lead, Northwest was outscored 33-13 to end the half and trailed 48-29 at halftime.

“We let Eastern shoot 61% from the floor and gave up too many shots at the rim,” Collins said.

In the first five minutes of the second half, Northwest outscored the Lancers 10-7 to slightly cut into the deficit. But Eastern Wyoming squashed any hope of a Trapper run, as they extended the lead back out to 23 points at 71-48 with 8:01 remaining.

The Lancers led by as much as 29 points until the Trappers made the final score 89-64.

Northwest shot better from 3-point range at 30.4% but were still below their season average of 32.8% — and the Trappers shot well below their average field goal percentage of 47.3%, finishing at 34.4% for the contest.

Camargo led the Trappers with 16 points, Stephens followed with 14 and David Ayala scored 11.

Northwest will now head back on the road, as they travel to Rock Springs to take on Western Wyoming (17-3 overall, 1-1 Region IX North) on Thursday at 7:30 p.m.