In a season where growing pains were to be expected, the Trapper wrestling team saw its growth pay off when they took part in the Northeastern Oklahoma A&M Duals in Miami, … 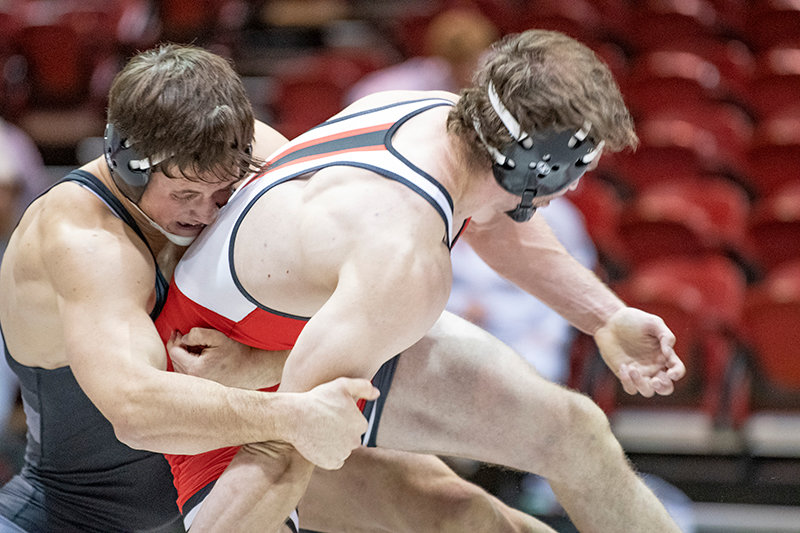 Ryker Blackburn takes down his opponent from Western Wyoming during their early season dual on Friday, Nov. 5. Blackburn went 4-0 at 197 pounds at the Northeast Oklahoma Duals, including three pins.
Tribune photo by Carla Wensky
Posted Thursday, January 20, 2022 8:20 am
By Seth Romsa

In a season where growing pains were to be expected, the Trapper wrestling team saw its growth pay off when they took part in the Northeastern Oklahoma A&M Duals in Miami, Oklahoma.

“They wrestled well, which is always great, but I was pleased with how we operated as a team throughout the whole trip,” said Trapper wrestling head coach Jim Zeigler.

After more than a month away from action, Ryker Blackburn’s return to the mat at 197 pounds ended in a 4-0 weekend with three of those four matches resulting in pins.

The fourth match for Blackburn was an intense one. After trailing 4-2 in the third period, he used a late comeback to defeat his opponent 5-4.

NWC’s Kendell Cummings also had an impressive showing, as he went 3-0 on the weekend at the 133-pound weight class with all of his victories coming by pin.

“Kendell [Cummings] is competitive,” Zeigler said. “He has stepped up and got some wins.”

Gus Harrison went 2-2 on the weekend, earning an impressive pin against Tyson Smith from Northeast Oklahoma, and a comeback win against Eric Cain of Colby, 7-6, after trailing 6-3.

Zeigler said he was proud of the fact that Blackburn and Harrison earned late comebacks, as that indicates their training is on the right track as they approach the end of the year.

At 125 pounds, Ivan Lee went 0-4. Zeigler said Lee will continue to face a difficult time at the weight class since he is undersized, but that he’s shown a lot of improvement throughout the season.

As the Trapper wrestlers are fast approaching the end of the year, their schedule has changed.

A planned weekend dual in Sterling, Colorado, has been canceled, as COVID-19 concerns in the Northeastern Junior College program have caused them to isolate.

Zeigler said the Rocky Mountain Districts have also been moved up one week, from Feb. 19 to Feb. 12. The change is meant to allow teams to have more time between districts and the NJCAA National Championships — which start Friday, March 4 — to potentially recover from COVID-19 outbreaks if they occur.