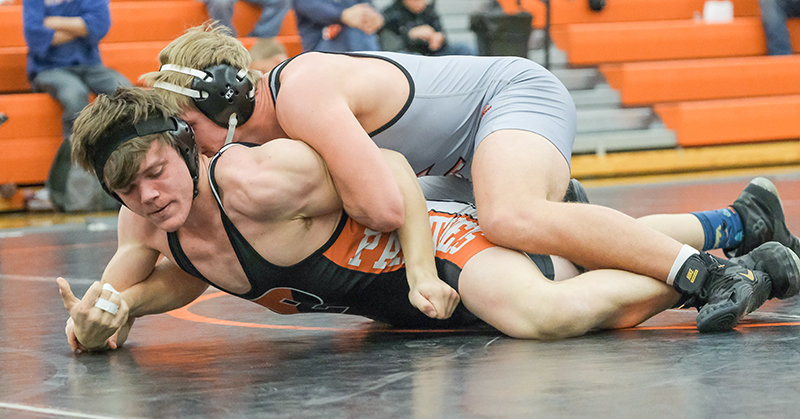 PHS sophomore Jimmy Dees tries to fight his way out of an early deficit against a Huntley Project wrestler during their dual on Jan. 11. Dees placed fourth at the Jug Beck Rocky Mountain Classic in Missoula last weekend.
Tribune photo by Carla Wensky
Posted Tuesday, January 18, 2022 8:15 am
By Seth Romsa

“That is a very high caliber tournament,” Panther head coach Nick Fulton said. “I was pretty pleased with the results.”

The highest placing Panther from the weekend was sophomore Jimmy Dees. Dees typically competes at 195 pounds, but wrestled up at 205 because Montana does not have a 195 class. He ultimately took home fifth place overall.

Dees (18-9) started his weekend with a bye and a win by pin to advance to the quarterfinals.

In the quarterfinals he took on senior Chase Youso (23-2) from Flathead High School, who has placed top five in each of the last two Montana state meets. Youso pinned Dees in the second period at the 2:38 mark and went on to place second.

He then dropped a match to Taylor Lenhartzen (17-7) — a top wrestler out of Washington — by pin, before winning a tough fifth place match by pin.

“He [Dees] is just getting better every time he steps on to the mat,” Fulton said. “It is good to see first-year varsity guys going deep in the bracket.”

PHS freshman Wyatt Nicholson also advanced to the quarterfinal at 106 pounds before falling to the tournament’s No. 1 seed, Davin Naldret (17-4) of Flathead, by pin. In the consolation rounds, Nicholson went 2-1 to finish seventh overall for the tournament.

PHS junior Jack Van Norman (3-2) put together a 2-2 performance overall for the tournament.

Fulton said he was pleased with Van Norman’s performance, as he put in a lot of work over the summer that he’s been able to turn into some wins.

Other athletes competing for the Panthers included:

The Panthers finished No. 14 out of 27 teams in attendance but were only 22 points away from placing in the top 10.

Almost every match for the Panthers after winter break has come against out-of-state competition at home and in Montana.

Fulton said he’s excited for the Worland match, as the Warriors are a well-coached team with a good program. Fulton hopes to see if the progress his team has made against out-of-state competition will carry into in-state matchups.

Following that home dual, the Panthers will be back on the road Friday and Saturday to take part in the Lander Valley Invitational.

The Lander invite is expected to include every 3A team in the state and will be a good gauge for the Panthers, as the state tournament is just over a month away.

The month of January is a grind for the PHS wrestlers as they will face tough competition this weekend and next weekend at the Ron Thon Invitational in Riverton, but Fulton would not have it any other way.