It was another tale of two halves for the Northwest men’s soccer team in Riverton on Saturday, but the Trappers held on after an early goal in extra time to take home a 1-0 win over Central … 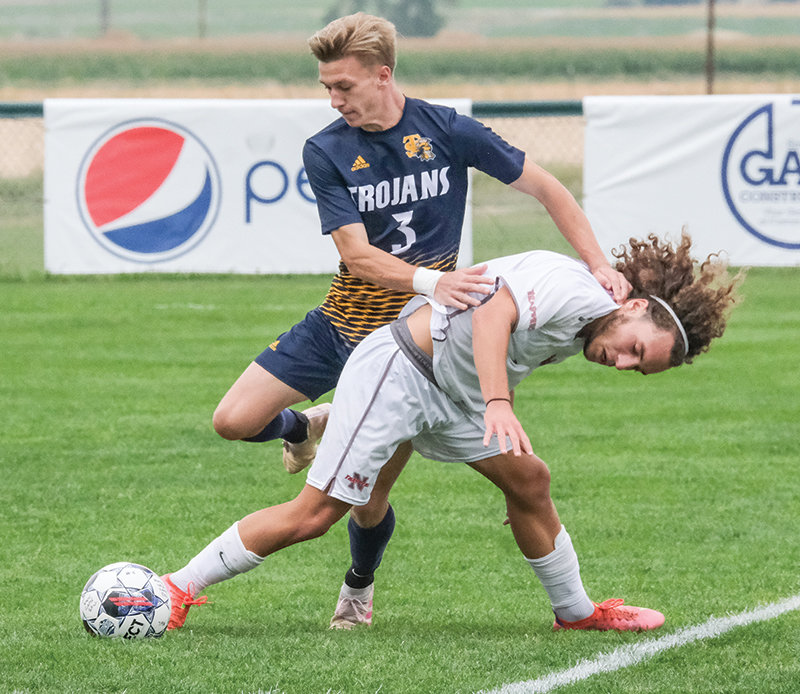 Benjamin Lachaize holds off a Trinidad defender in a home matchup earlier this season. Lachaize and the Trappers head to Casper on Saturday to try and upset No. 20-ranked Casper College.
Tribune photo by Seth Romsa
Posted Thursday, October 6, 2022 8:15 am
By Seth Romsa

It was another tale of two halves for the Northwest men’s soccer team in Riverton on Saturday, but the Trappers held on after an early goal in extra time to take home a 1-0 win over Central Wyoming.

“In the first half we played some really good soccer,” coach Rob Hill said. “We had a team meeting and a film session and figured out where the gaps are and where we need to improve.”

Unfortunately that strong play did not continue into the second half.

Northwest started to play long balls, with bad habits starting to settle in.

Those long balls and a hard working Rustler team made it difficult for the Trappers to find any shots, as they totaled only two in the second half.

Neither team found the back of the net in regular time, setting up extra time.

After a talk before the extra session, Northwest regathered its footing and started to play more consistent soccer again.

Ben Laybourne found the back of the net for the Trappers just three minutes into the extra session after a good cross from Arthur Dalfior Katao found its way onto Laybourne’s head.

That header proved to be the winner, with Northwest seeing out the final minutes to get a non-conference win.

“We needed that,” Hill said. “It was not an easy game by any means.”

“We watched the Casper film and understood the game,” Hill said. “The players are very intelligent and understand what gaps both teams have.”

Hill is hopeful that his team is starting to hit their stride at the right time, with three games remaining before the playoffs in two weeks.