Men’s season ends on the road

A season of highs and lows came to an end on Saturday from the Northwest College men’s basketball team. The Trapper men traveled to Torrington to take on Eastern Wyoming for their Region IX …

Men’s season ends on the road 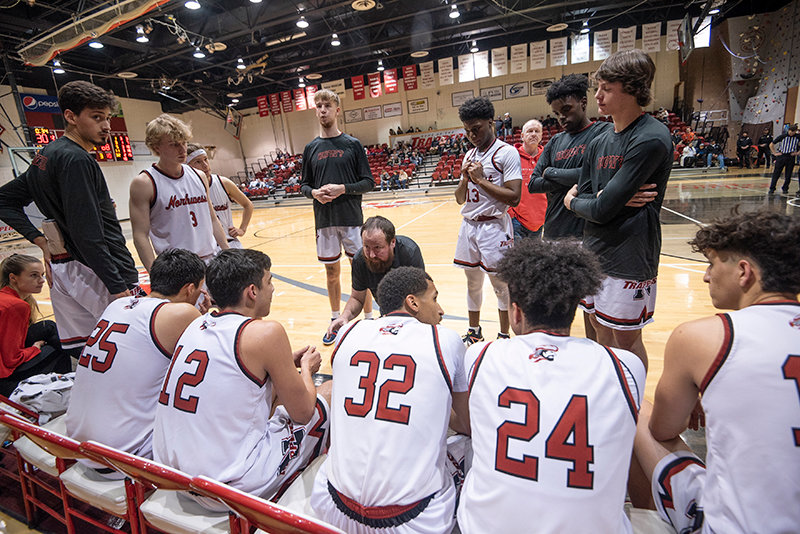 Trapper head coach Jay Collins talks to his team during a Feb. 23 matchup against Central Wyoming. The NWC men’s season ended in a loss, as they dropped a road contest against Eastern Wyoming on Saturday.
Tribune photo by Carla Wensky
Posted Thursday, March 3, 2022 8:10 am
By Seth Romsa

A season of highs and lows came to an end on Saturday from the Northwest College men’s basketball team. The Trapper men traveled to Torrington to take on Eastern Wyoming for their Region IX play-in game and dropped the contest 99-85.

Squaring off against a team that defeated the Trappers (13-16 overall, 2-8 Region IX North) twice already, Northwest knew they needed a strong start to beat the Lancers (15-15 overall, 4-6 Region IX North) on the road.

NWC grabbed a quick 4-0 lead, before Eastern responded with a 13-0 run. The Trappers responded over the coming minutes, pulling within 21-20. However, the Trappers were unable to get a stop as a tipped rebound ended up in the hands of a Lancer, who extended the lead.

“That has been one of our downfalls in 2022, is rebounding,” Trapper head coach Jay Collins said.

Just minutes after trailing by a point, a 12-0 Lancer run put NWC down by double digits. A 3-pointer by freshman Zane Langrehr ended the run, but Northwest trailed by 10 with 6:36 left in the half.

Despite NWC scoring at a more efficient pace, Eastern held the visitors at arm’s length.

With the Trappers still trailing by 10, their leading scorer during regional play, freshman Juan Pablo Camargo, picked up his fourth foul with 1:33 left in the half.

Northwest cut the lead to 46-40 at halftime on a jumper by Vladimir Vondra in the closing seconds of the half.

The second half started strong for the Trappers, as they came out and pulled the game within two, 52-50, on a 3-pointer by sophomore Gabriel Gutierrez.

A chance to take the lead fell short, however, as another three by Gutierrez hit the rim. Eastern responded by hitting a trey of its own to re-extend the lead.

Despite stronger scoring, Northwest was unable to find a stop on the defensive end, as they tried to find the right defensive combo to stop the Lancers.

Northwest switched between a man-to-man defense and a 2-3 zone, trying to find the right combination to stop Eastern.

“That has been one of our weaknesses all year, is
defending lanes to the basket,” Collins said. “We switched to a zone and they started knocking down outside shots; it was kind of like picking your poison. We did not do a great job of defending against their strengths.”

Gutierrez and sophomore Alex Avila picked up the scoring with Camargo on the bench, but a Gutierrez foul sent him to the bench with 14:20 left, putting Camargo back into the game.

Eastern continued to push the envelope as they extended their lead to 70-56 with just over 12 minutes left. Northwest was unable to make a significant dent in the deficit until Gutierrez hit a layup with four minutes left to pull the Trappers within single digits. However, Eastern responded and held off NWC, 99-85.

Avila led the Trappers with 19 points, freshman Bryson Stephens had 18, Gutierrez finished with 13, Camargo had 12 and Langrehr had 11.

With the 2021-22 campaign over, Collins and the Trapper team have decisions to make as they head toward next season.

Sophomore guard Alan Swenson and Avila are the two Trappers who are ineligible to return, as they’ve used their two years of eligibility plus their extra COVID eligibility year.

Every other player on the roster is eligible to return, but Collins said the discussions on who plans to return will be held in the next week or two.

“We will figure out the future here soon,” the coach said. “Of course I would love them all back, but we want to figure out what the right path for each guy is — whether that is here or somewhere else to further their education.”