Between shaking hands with first lady Jenny Gordon in August and planning her trip to Ireland with roughly 50 other Wyoming FFA students in July, Powell High School senior Allison Morrison has … 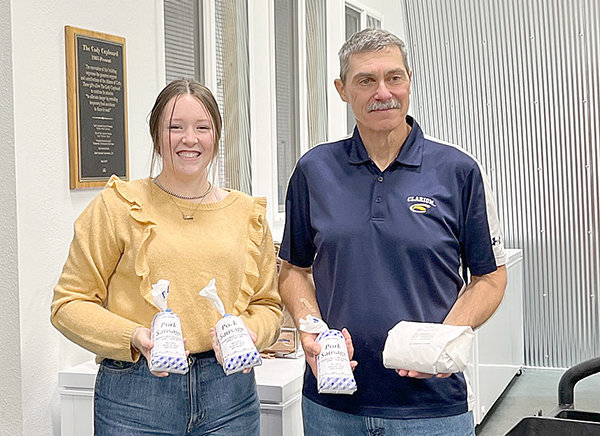 Allison Morrison (left) stands with Dan Schein at the Cody Cupboard after donating half her hog to the charity.
Courtesy photo 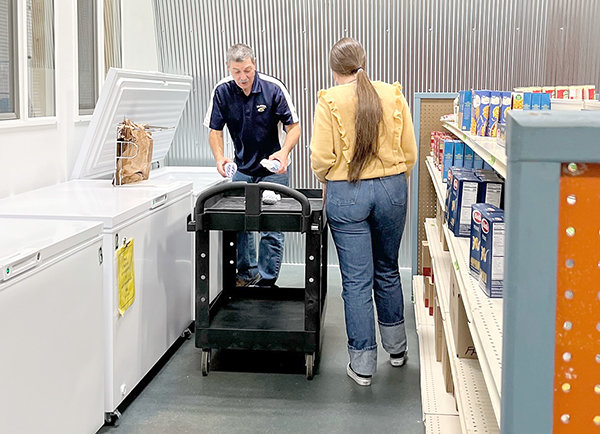 Between shaking hands with first lady Jenny Gordon in August and planning her trip to Ireland with roughly 50 other Wyoming FFA students in July, Powell High School senior Allison Morrison has already had a busy start to senior year with plenty more ahead of her.

Morrison entered into a lottery as part of Gordon’s Fair to Fork program this summer, which purchased one hog from a youth who was selected by lottery in each Wyoming county to give back to the community. Morrison, motivated by the chance to give back, was able to apply for the lottery twice through 4-H and FFA. Upon winning she was given a plaque to commemorate her selection as a winner of the lottery in August at the Wyoming State Fair Parade. She was also given $500 for one of her hogs; butchering costs were covered by the state. Morrison was then able to choose where in the community to donate the meat.

“I wanted to make sure that I gave some to the Cody community and the Powell community, just because first of all, I live in Powell, so I thought that community maybe meant a little bit more, but if I can’t [donate through Loaves and Fishes], then I’ll find  somewhere else.”

As part of winning the lottery Morrison was given the opportunity to meet Gordon and ride with her in the float during the Wyoming State Fair Parade. The ever-busy Morrison had to split her time between the state’s first lady and the Wyoming FFA leadership team who Morrison initially traveled to the fair with.

“I rode halfway on the wagon with her [Gordon], and then I threw candy out to do my Wyoming State Leadership stuff,” Morrison said.

She said that her favorite part of the experience was the opportunity to meet the Gordons as well as the other winners.

“It was nice to get rid of the pig too,” Morrison joked. “She was costing a little bit of feed money, (I had been) feeding her for a long time, but that’s alright.”

As part of a separate program, Morrison will be traveling to Ireland with roughly 50 other FFA students. The trip was originally an opportunity offered to Cheyenne students by their FFA advisor but when he was left with empty spots he opened the application to 4-H students across the state.

To apply, Morrison had to submit an online application and complete a 45 minute Zoom interview she called “rigorous.”

“They kind of wanted to see who I was as a person, like, read my character and stuff, and then they asked me questions,” Morrison said.

Morrison looks forward to the trip where they will be able to see how Ireland’s agricultural industry works and be exposed to different political opinions. She is of course excited to also do “touristy stuff.”

Morrison is particularly interested in seeing how a commercial sheep operation runs. She has experience with sheep on the show circuit but has not had much experience working with sheep to sell them as a product.

“I actually want to do some artificial insemination on sheep as a career. So I really do want to see all aspects of the sheep industry,” Morrison said. “And I think that’s a really good place to give me those viewpoints and those perspectives.”

Morrison’s 10 day journey through the Emerald Isle will cost a total of $5,000 although $1,000 is already covered by the Wyoming 4-H foundation. For the rest of the trip, Morrison is raffling off turkey provided by Southfork Turkeys, a quarter of beef provided by Earhart Farms and two halves of a hog provided by Morrison. Those interested in purchasing tickets can contact Morrison’s mother, Heather, at 970-290-9372. Allison has also made listings in the Powell and Cody classifieds or can be contacted through Facebook Marketplace. Tickets are on sale for $25 per ticket or $60 for three tickets.