Nor is it Kallie’s first time at the College National Finals Rodeo. The 30-year-old mare is competing for the third time in the … 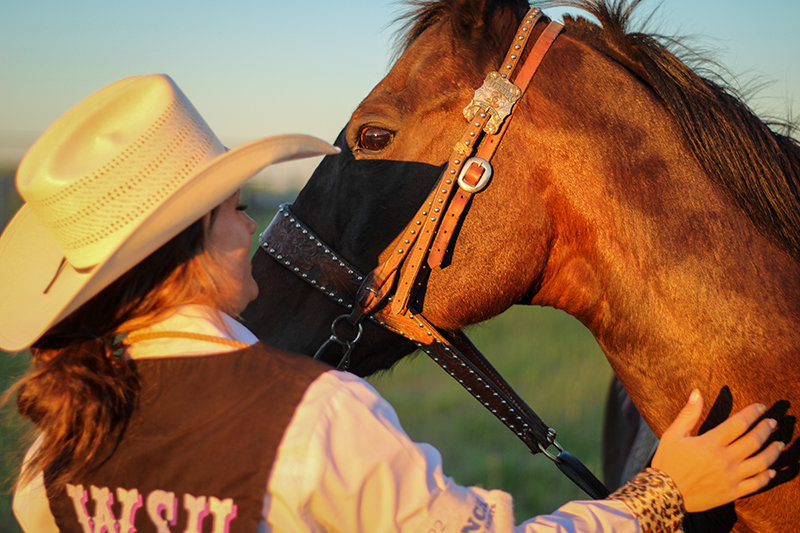 Nor is it Kallie’s first time at the College National Finals Rodeo. The 30-year-old mare is competing for the third time in the CNFR. This year, she’s returned with Emma Hodson, competing in the goat tying event for Weber State University.

Most competing rodeo horses are 10 to 20 years old. But Kallie, who will turn 31 this year, has been in the arena since she was 12. What’s more, all five of the Hudson girls, who range in age from 11 to 30, have competed with the horse over the years.

“She’s been doing this for a really long time,” Emma said. “All four of my sisters have rodeoed, and they’ve all came (to Casper). She has four state titles on her in Utah, maybe five.”

The Hodson family carries sort of a legacy in the rodeo scene. Both Brad and Karen Hodson attended Weber State University in Utah on full-ride scholarships. Their daughters — Jessie Kesler, Meggen Ward, and twins Erryn Hendrix and Emma — have secured full-ride scholarships to the school as well and have rodeoed for most of their lives.

Kallie, meanwhile, started as a “pasture horse” — basically as a pet in someone’s backyard. At the age of 8, she caught the attention of Brad, who at the time was looking for a replacement horse for his kids. After a quick ride, he called his wife to set up the trailer. The horse was going home with them.

“She just had a kind eye, and I trusted my instincts,” Brad said. “To have gone through all my daughters, it’s just phenomenal. She’s just been a blessing, and we’ll never be able to replace her.”

The oldest of the Hodson sisters, Kesler, was the first to compete with Kallie. The first time Kesler tried goat tying on Kallie, the horse knew what to do. After a few practices, Kallie even recognized where to turn to get to the goats.

Both Emma and Ward said that they loved watching their sisters take turns competing on Kallie, and while Kesler agreed, she said she felt a little more possessive of the horse since she was the first to compete with her.

The way the sisters describe Kallie, she sometimes sounds like a well-taken-care-of vehicle being passed down through the siblings.

“She’s the Rolls-Royce of the Hodson girls,” Kesler added. “I’m very protective of her, even though she’s 30 years old and still competing at rodeos. I feel like she’s mine and I’m letting them borrow her.”

Kallie knows that she’s a Rolls-Royce too. The sisters have a bunch of affectionate nicknames for her: pretty ornery, the queen bee, sometimes a brat, a little turd and a hot mess. According to Ward, the family jokes that the 1973 country song, “Marie Laveau” by Bobby Bare, is the horse’s theme song.

“Down in Louisiana/where the black trees grow/lives a voodoo lady named Marie Laveau,” the lyrics of the song go. “She got a black cat’s tooth and a Mojo bone./ And anyone who wouldn’t leave her alone/she’d go (screeching yowl) another man done gone.”

Kallie may have an attitude, but she’s a 30-year-old horse that knows what she’s doing, the family says. And she’s good at it.

“She knows her job and pushes you that way,” Brad said. “She’s hard to handle right before you go in, but we kind of got a bond from one (sister) to the next. ... To have a horse that old competing at this level is pretty unheard of. She knows what she’s doing.”

None of them outright admitted it, but all of the Hodsons spoke about Kallie like they had a soft spot for the horse, regardless of her sometimes pesky habits.

As Emma talked about her horse, Kallie danced around, trotting from side to side and going as far as Emma’s grip on the reins would let her.

“Well, see this,” Emma told Kallie while trying to keep her still for a photo. “This is probably the most difficult thing you had to do today.”

The youngest of the sisters, Kenna, recently took the horse to the state finals as a part of the Utah Youth Rodeo Association. As a fifth-grader, she and Kallie finished the goat tying run with a 7.5 in the event.

“It’s a legacy in a sense,” Ward said. “We always hoped that Kenna would be able to ride and win on her ... Now seeing Kenna continue to grow, and just be a cowgirl, I’m just proud.”

Emma’s getting married next week, and this was her last run competing with Kallie. Walking back to the trailer seemed like a bittersweet moment for her, but the horse continued to trot on like she had walked the route a hundred times before.

With one last Hodson sister competing, Kallie can take comfort in the fact that while this isn’t her first rodeo, it certainly won’t be her last.

“She’ll definitely go into retirement,” Emma added. “But right now, as you can tell, she’s still kicking it.”