It was in a package addressed to Daniel D. Lee from a law firm in Berkeley, California.

It was accompanied by a one-page letter. The brief text … 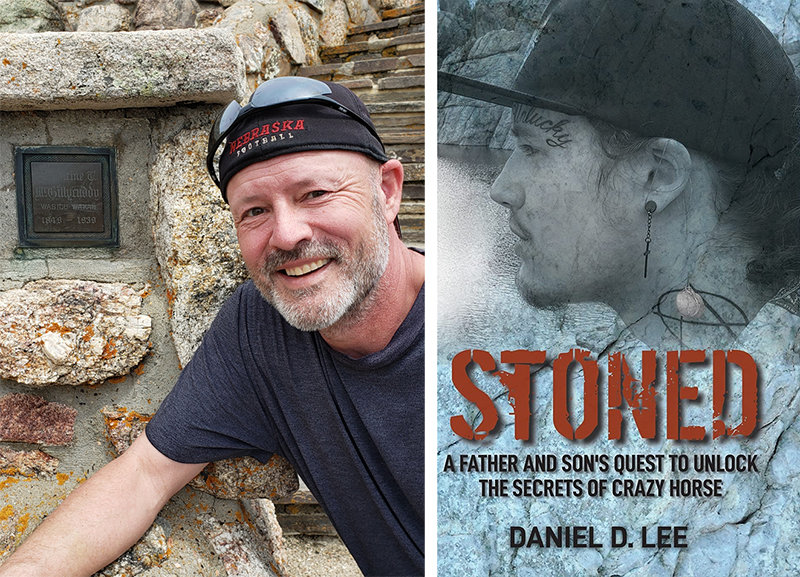 Left: Daniel Lee is posed with the plaque covering the entombed remains of V.T. McGillycuddy atop Black Elk Mountain. McGillycuddy was the first to climb the highest point in the Northern Plains and wanted to be buried there. Right: ‘Stoned’ is historical fiction about Crazy Horse and the last of the Indian Wars in the Northern Plains, a first book by Daniel Lee.
Courtesy photos
Posted Thursday, January 20, 2022 8:15 am
By Dave Bonner

It was in a package addressed to Daniel D. Lee from a law firm in Berkeley, California.

It was accompanied by a one-page letter. The brief text explained: “Enclosed please find the possessions of Dr. Valentine T. McGillycuddy, your ancestor, that have been held in trust in accordance with his Last Will and Testament, bequeathed to you, as his rightful heir.”

Daniel Lee would later learn that the satchel had been held in trust for 80 years after McGillycuddy’s death in 1939.

But at that moment, Valentine T. McGillycuddy was a complete unknown. Lee was living in a modest one-bedroom apartment with his son, Brody, trying to repair a broken relationship and encourage the 19-year-old to move beyond drug and alcohol addiction. His method?  One-on-one love.

Daniel Lee had his own demons to tame. He had stepped away from two careers — first as an officer and attorney in the U.S. Air Force and then as a corporate attorney in a big city law firm. His marriage in shambles, he walked away from that too.

“Stoned” weaves a fictional story around a core of historical record at the end of the Plains Indian Wars, while at its heart revealing a self-evaluation by the author and his fierce determination to forge a father’s bond with his son. The book is a first literary effort by Lee, formerly of Powell. (He’s better known to his Powell High School classmates of 1987 as Danny Lee.)

In his story, the satchel contained a bound journal of some 200 handwritten pages by McGillycuddy, a field surgeon with the U.S. military, then as first agent of the Pine Ridge Agency in South Dakota. The satchel also held a tantalizing, ornate key, later described to be the key to McGillycuddy’s burial crypt atop Black Elk Peak (formerly Harney Peak), the highest point in the Black Hills.

Could it contain buried treasure?

The journal becomes the narrative for much of “Stoned,” with careful attention to events in the historical record leading to the death of Crazy Horse at Camp Robinson, Nebraska, in 1877. McGillycuddy, the self-proclaimed “Friend of Crazy Horse,” treated the dying Sioux chief, who was bayoneted in a surprise ambush.

The book details the adventures of Lee and his son Brody, as they “road-tripped” to examine places of interest in the Crazy Horse-McGillycuddy history. They climbed Black Elk Peak and visited Fort Robinson, the McGillycuddy Mansion in Rapid City (where he lived after leaving government service), the Badlands, Pine Ridge and the Wounded Knee Memorial.

Like McGillycuddy before them, they became proponents for more humane treatment and better economic fortunes for the Lakota Sioux in reservation life. They are both proud tribal members of the Oglala Lakota Nation.

And of supreme importance to Daniel Lee, the ties are cemented. He is a dad.

“Stoned” is dedicated, first, “to my Mother, a mom in all senses of the word. Without her sharing of knowledge, encouragement, unconditional love and support throughout my life, it would not have come to fruition; and secondly, my son, Brody. I hope I have been the father to him as she is a mother to me. Mom, the backbone. Me, the middleman. Brody, the hero.”

“Stoned” is available on Amazon and Lee’s website, www.wyodaktanapublishing.com.