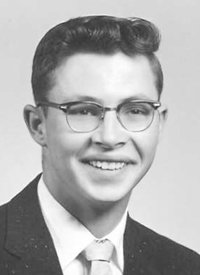 Harold Dorn Thornberry, age 82, of Portland, Oregon, passed away in the comfort of his home on Saturday, May 7, 2022.

Harold was born July 29, 1939, in Powell, to Harold Wade and Lillian VaLaire Thornberry. Known as Dorn to family and childhood friends, he devoted his life to God and his family.

He married his childhood sweetheart Carol Fay Cozzens/Thornberry on June 20, 1958. While in Wyoming, he worked at Cream of the Valley Dairy and was the Sweetheart Bread man in Buffalo, Wyoming.

He was called to active duty during the Berlin crisis in 1961 and served with Company B, 1022nd Engineer Batallion, at Ft. Lewis, Washington. The family moved to Portland, Oregon, in 1962, where he worked as an electrician at Owens Illinois Glass Company, until retiring in 1998.

Twenty-four retirement years were filled with travels to Europe, Caribbean, Alaska, and RV travels enjoying the USA, Wyoming, Oregon coast and winters as snowbirds in Arizona. He seldom missed an event of his nine grandchildren and they could always count on Grandpa in the bleachers at all sporting events. They will forever treasure his love and sound advice. He was our rock, our foundation and taught us to carry on.

He and best friend/loving wife Carol moved to a 55-plus retirement community in 2015 where they enjoyed entertaining their growing family and their 20 great-grandchildren. The cycle of attending sporting events carried on with the next generation.

His brother-in-law Donnie Cozzens preceded him in death.

Fond memories and expressions of sympathy may be shared at www.batemancarrollfunerals.com for the Thornberry family.

He will be honored with a military graveside service June 22, 2022, at Willamette National Cemetery, in Portland, Oregon, where family will say their farewells.