An up and down week for the Trapper women’s basketball team started with a lopsided loss on the road to No. 20 ranked Casper College. However, a late fourth quarter comeback at home against … 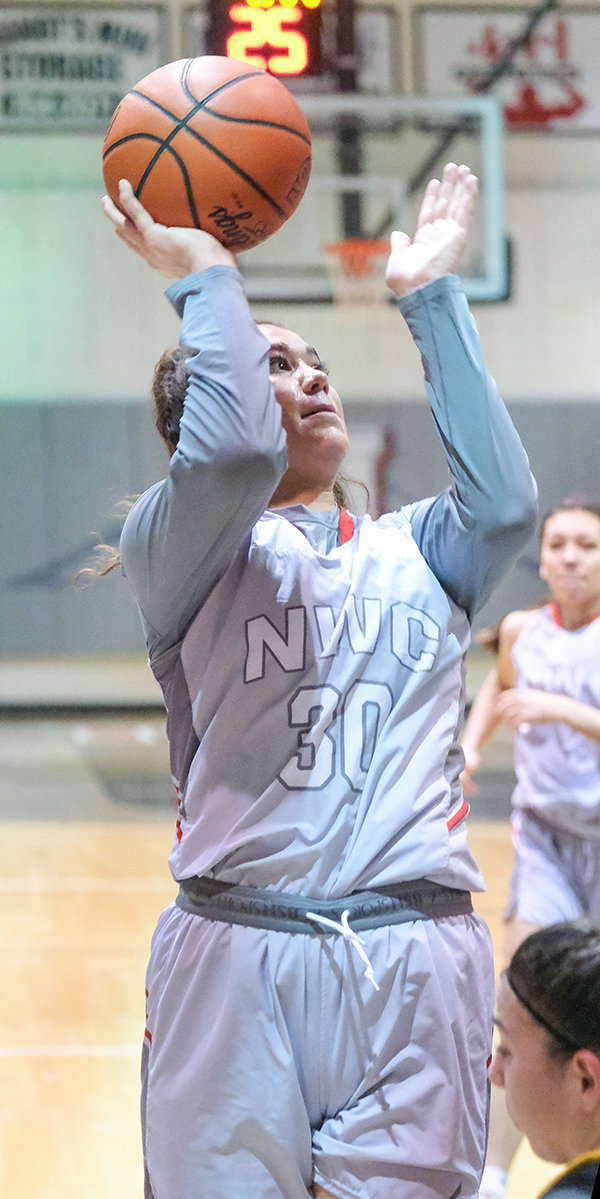 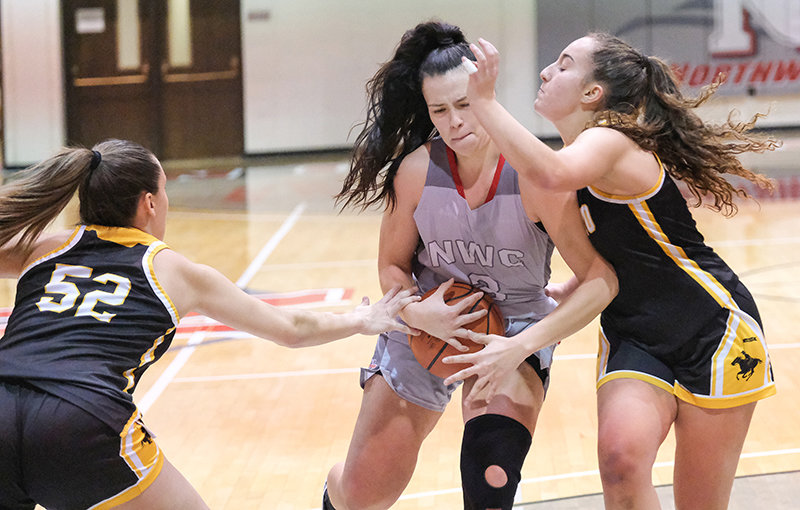 NWC sophomore Celina Tress drives into the lane as two Eastern Wyoming defenders collapse on her. Tress and the Trappers will head on the road to Western Wyoming before returning home next Wednesday at 5:30 p.m. to take on Central Wyoming.
Tribune photo by Seth Romsa
Previous Next
Posted Thursday, January 27, 2022 8:20 am
By Seth Romsa

An up and down week for the Trapper women’s basketball team started with a lopsided loss on the road to No. 20 ranked Casper College. However, a late fourth quarter comeback at home against Eastern Wyoming salvaged a 1-1 Region IX North start for the Northwest College squad.

The Trappers trailed 8-5 after the first six minutes, but a 3-pointer opened up the scoring for Casper. The Thunderbirds took a 19-12 lead into the second quarter.

Casper College similarly outscored the Trappers 13-10 over the first five minutes of the second period, but neither team was able to find more scoring opportunities the rest of the half. The TBirds led 36-22 at halftime.

“I think against Casper, they definitely came out the aggressors and we came out kind of nervous,” Trapper head coach Lauren Davis said.

Both teams struggled to find the basket over the first five minutes of the second half, as both teams scored nine points to keep the score difference at 14.

Casper College went on a 7-0 run to push the lead to 21 points, but a basket plus the foul from Nayeli Acosta allowed Northwest to finish the quarter on an 8-2 run of their own to make it 54-39 going into the final period.

However, the fourth quarter belonged to the TBirds, who started on a 16-0 run and outscored the Trappers 27-8 to finish the game with an 81-47 win.

Acosta finished with 17 points, followed by Celina Tress with 15 and Darla Hernandez chipped in 10, as they scored 42 of the Trappers’ 47 points.

After a disappointing loss to Casper, the Trappers returned home on Saturday to take on Eastern Wyoming (11-8 overall, 1-1 Region IX North), looking to avoid an early 0-2 start to Region IX North play.

The Lancers gave the Trappers an early shot to the jaw, as they took advantage of early turnovers and missed shots from Northwest to jump out to an 8-0 lead in the first 1:25.

Eastern Wyoming pushed the lead to 11 points over the next three minutes.

“We did not handle their press very well,” Davis said. “Once we figured it out and figured out our execution on offense I think that was the key to the game.”

Northwest finally slowed down the fast start, bringing the game to within 21-17 on an Annie Mitzel 3-pointer at the end of the period.

The Trappers settled into their offense, and made it 29-26 off an Acosta 3-pointer with 6:06 remaining in the second quarter.

Over the next four minutes the Trappers again struggled to score, as the Lancers pushed the lead back out to eight. However, Northwest finished the half on a 6-0 run — capped by a Kierra Cutright jumper with seconds remaining — to make it 34-32 at halftime.

In the third quarter, Eastern took advantage of early missed shots by Northwest to push the lead to 44-35 and closed the quarter up 50-43.

The Lancers appeared to take all the momentum when they pushed the lead out to double digits at 57-47 with 6:51 remaining. But Northwest went on a 10-0 run to tie the game, started by a Hernandez jumper and capped by a steal and layup from Cutright.

“Once we figured out what was working for us, Eastern was not able to stop it and the girls did a great job executing that,” Davis said.

Cutright wasn’t finished, as she came down the floor and hit a jumper to give the Trappers their first lead of the game with 3:36 remaining. A Mitzel 3-pointer put NWC up 63-59 with 1:40, but Eastern Wyoming answered with a trey of their own.

An Acosta free throw put NWC back up by two points, and two missed shots from the Lancers at the end of the game gave the Trappers a 64-62 comeback victory and a 1-1 start in region play.

Cutright and Hernandez led the way for the Trappers with 16 points each. Acosta finished with 11 points and Mitzel added 10 as the Trappers had four in double figures.

NWC will now head on the road again, as the squad travels to Western Wyoming (4-15 overall, 0-2 Region IX North) on Thursday at 5 p.m.

The Trappers were set to head to Cheyenne to take on Laramie County Community College (12-7 overall, 1-1 Region IX North) on Saturday, but the game has been postponed due to health concerns in the LCCC women’s program.