Hunting starts with education, but fun is the key to raising young hunters

Almost ready to write off his bison tag after many failed attempts, Ryan Muecke got a tip that the herd was on the move.

He raced home after work and found his food and pack ready for him. Ryan …

Hunting starts with education, but fun is the key to raising young hunters 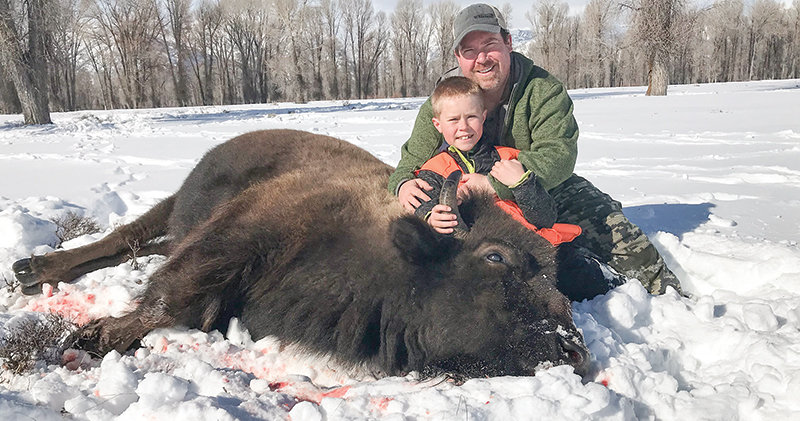 Ryan Muecke and his son Tucker get a photo with their cow bison that was nicknamed ‘cowzilla’ by a local game warden. The family has introduced outdoor sports to their children and the family works together to harvest and process all their game.
Courtesy photo 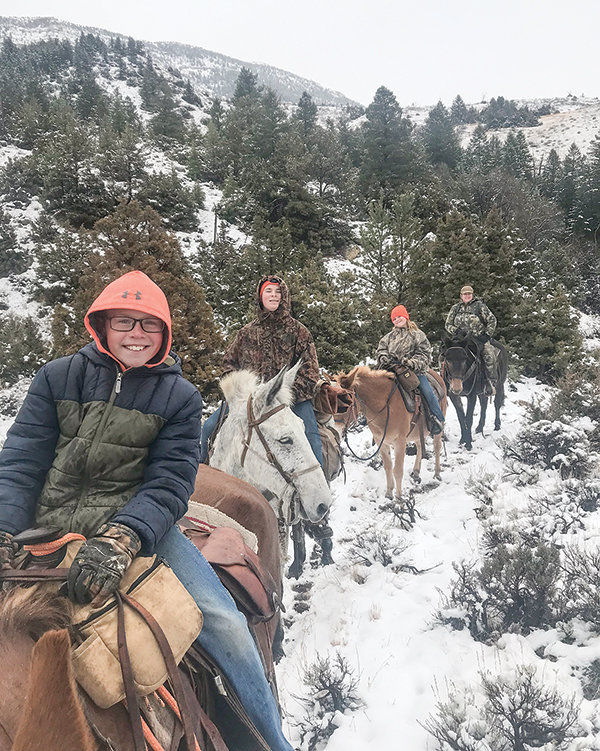 Tucker, Curtis, Charlee and Christy Muecke head into the forest during hunting season while following dad and husband, Ryan Muecke. Ryan has harvested at least one of every species of big game in the state except a mountain goat.
Courtesy photo 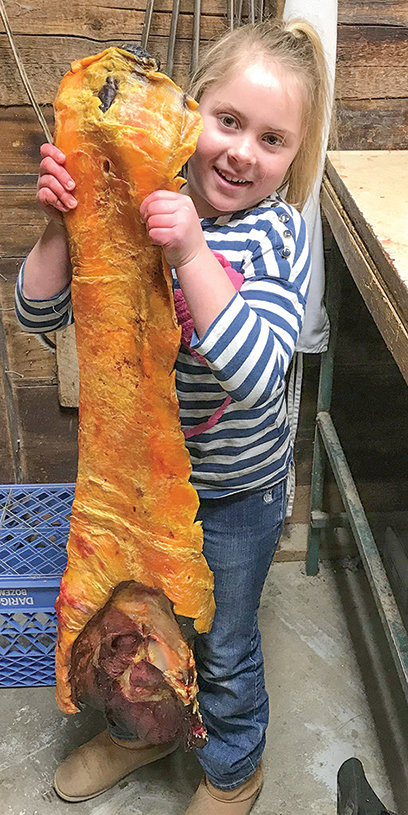 Charlee Muecke helps in the family’s private butcher shop while they process a bison shot by her father Ryan in 2020.
Courtesy photo 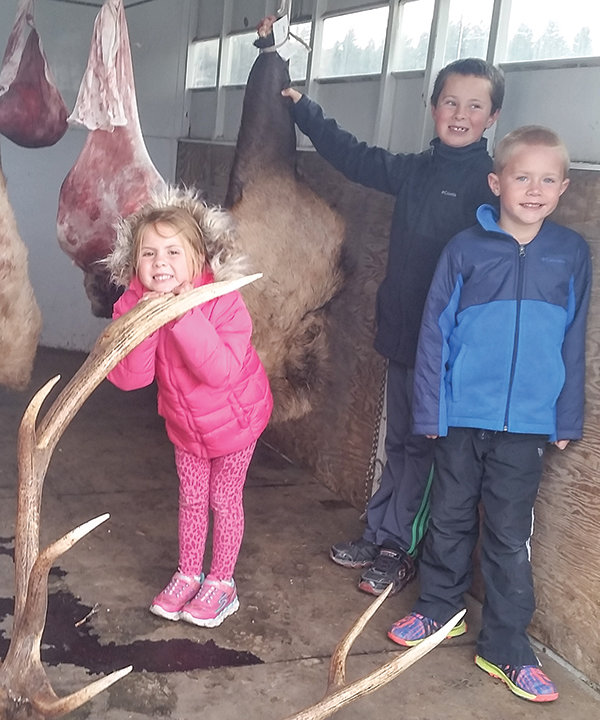 Charlee, Curtis and Tucker Muecke help harvest an elk taken by their father. Wild game is an important part of the family’s diet.
Courtesy photo 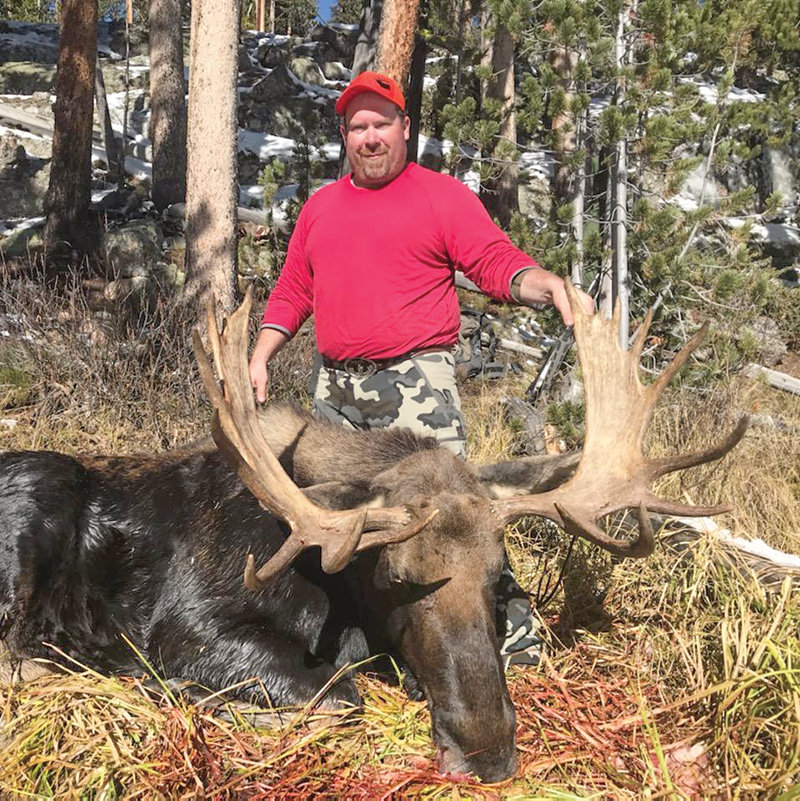 Ryan Muecke with a moose he harvested. Not only does the family hunt together, they also enjoy spending the colder months ice fishing and harvesting game birds when in season.
Courtesy photo
Previous Next
Posted Friday, September 2, 2022 8:25 am
By Mark Davis

Almost ready to write off his bison tag after many failed attempts, Ryan Muecke got a tip that the herd was on the move.

He raced home after work and found his food and pack ready for him. Ryan and his wife, Christy, have been together 22 years and Christy knew he’d be lucky to get two or three hours of sleep after a long drive to his Jackson hotel and she wanted to help any way she could. She would have joined him, but was out of vacation days. It was a school night.

A kiss and a hug later, Ryan was on his way out the door when he saw his son, Tucker, by the truck with his BB gun slung over his shoulder and a snowshoe in each hand. “Mom said I could go with you,” he insisted.

“He was so adorable,” Christy said with a giggle.

Ryan couldn’t resist. Soon the two were on the road to adventure. A couple hours later the adrenaline had worn off, and Tucker fell asleep to the hum of the January road.

“He made it to Shoshoni before he was out for the count,” Ryan said.

Ryan pressed on, making it to the hotel a little more than two hours before the 5 a.m. alarm chimed.

They awoke to deep snow and cold. Ryan worried it might be too much for his 10-year-old. They set out, quickly finding the snow to be waist deep. They could see bison but couldn’t get close enough for a shot. They gave up on the morning hunt, deciding to snowshoe down the Gros Ventre River after a warming lunch.

Three miles down the river the two were cold and their legs were weary. They picked out a spot with a view of the valley and set up for a long wait.

“I stomped out an area around a tree and we built a fire. We planned to stay there until dark,” Ryan said.

Shots rang out, focusing the duo. The two hunkered down on either side of the tree. Soon a line of bison cows made their way within range. Tucker, who had traded his BB gun for a rangefinder for the hunt, whispered out the ranges — finally within range — and Ryan picked the largest cow. His shot was true.

“I shot the biggest cow in that single file group and then the work began,” Ryan recounted.

There was no shrinkage when they made it to the cow. It later earned the nickname “cowzilla” by a Wyoming Game and Fish Department warden patrolling the area. Transporting a bison home for butchering was going to be a big job, the hardest part being field dressing, quartering and getting it back to the truck.

The two worked to field dress the beast, but the sheer weight was too much for the pair. With the help of another hunter they were able to roll the cow, allowing Ryan to finish the job properly.

Ryan has a lot of experience with knives. His father, Cy, was a butcher and taught his son everything he knew. Now, with three of his own children, Ryan is passing on his knowledge to the next generation. Christy, who has harvested birds and big game, adds her own experience into the mix, but her tender heart and hunting isn’t the easiest of combinations.

Fortunately for the duo, a “tag and drag” outfitter came to their kill site and offered to get the bison back to a parking lot about 7 miles away.

“Tucker and I were played out and we still had 3 miles to go to get back to the truck.”

They used a winch to get the bison in the bed of the truck and eventually made their way home, only stopping at McDonald’s for a celebratory meal. It was the only place open, Ryan insisted.

The Powell couple has offered their children opportunities afield, but they haven’t forced hunting on them.

“Don’t force it, just let them be who they want to be,” Christy said.

“Let it be a family thing,” Ryan chimed in. “Make it an adventure.”

Yet, once at home, the entire family helps with processing the meat. Curtis, the oldest child, has harvested big game but isn’t into outdoor sports as much as Tucker. Charlee is still too young to attend hunter safety classes, but is eager to attend.

Christy snapped a picture of Charlee that next day as she held one of the cow’s backstraps.

“It was as big as her,” she said of her daughter.

They don’t just put a gun in their children’s hands. Education is extremely important to the family. They target practice with bows and a variety of weapons at home. Their three children either have or will go through hunter safety classes, and participate in 4-H programs teaching safety and marksmanship.

Tucker is on the Polestar shooting team. He decided hunting was more important to him than playing baseball, so he gave up the ball and glove and started shooting competitively.

When the hunting season ends, the family spends time fishing, harvesting trout through the ice. In the summer they are often on horseback, camping and scouting for the next season. Of course, 4-H takes a lot of their time. Everyone is fully involved in raising and showing livestock.

“As parents, we can’t force our way of life on anybody. Everybody’s got their individual personalities and what they’re into. We accept that,” Ryan said.

Ryan has harvested every big game animal in Wyoming except a mountain goat. Everyone in the family has enjoyed hunting. But this could be a big year for Tucker. He drew his first elk tag this year and can hardly wait for the season to begin.

“We aren’t the best hunters, but we love our lifestyle and want our kids to embrace it too,” Christy said.

Cy died before he was able to see how his guidance has influenced his grandchildren, but Ryan knows he would be proud.

“He’s just looking down smiling, I think,” he said.