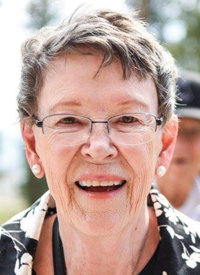 Lori was born the first daughter of Phil and Leah Merritt in Townsend, Montana, Aug. 11, 1937. She attended school in Townsend through the 10th grade and then graduated from a Stevensville, Montana, High School. Lori graduated from Montana State University in 1959.

She married Alfred (Al) C. Althoff, and they taught school in Alaska and Montana. In 1974 they moved to Powell and owned War Surplus Store for 22 years. After retiring, she and Al moved to the Olympic peninsula of Washington to enjoy the climate, ocean, mountains and going to jazz festivals down the coast of Washington and Oregon.

Lori was blessed with two beautiful, active children, loved attending their athletic and school activities, and then watching them raise their own beautiful families.

Lori said prayers every day in hopes our nation and the world will be a kinder, gentler place to live.

In lieu of flowers, donations may be made to Powell Senior Center in Powell.