The COVID-19 pandemic didn’t keep Park County residents from voting in this year’s primary election. A total of 8,807 local residents cast ballots between July 2 and Tuesday evening; it … 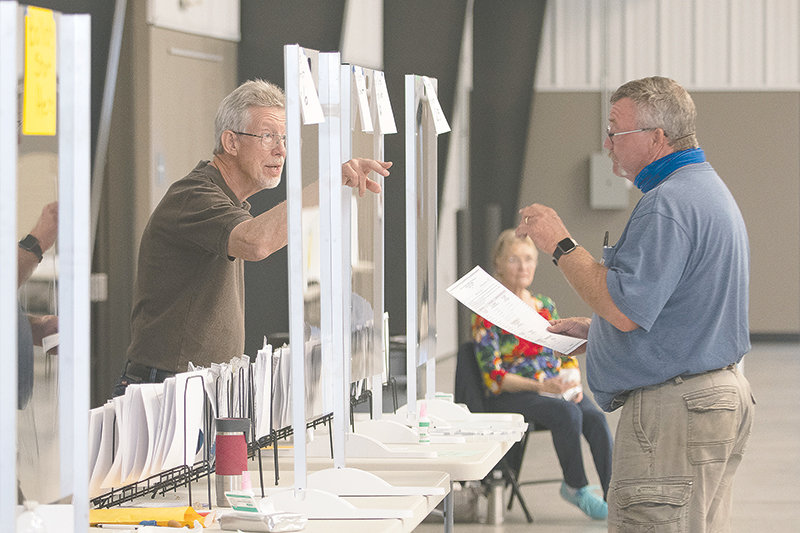 Election official Howard Haun (left) directs Nevin Jacobs to the next station at the Park County Fairgrounds after he received his ballot for Tuesday’s primary election. The county consolidated polling places to four locations in Cody, Powell and Meeteetse.
Tribune photo by Mark Davis 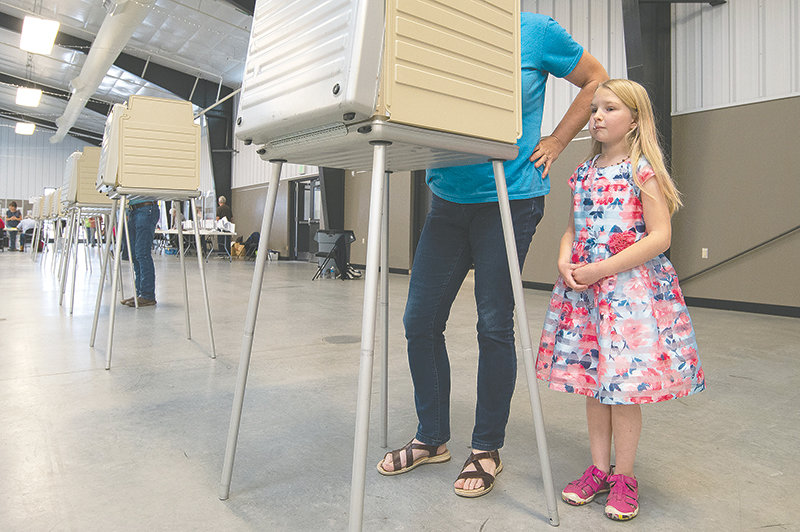 Liza Smith, 8, watches as Barbara Smith votes in Tuesday’s primary election. It was the second time Liza has been able to watch the process — this time enjoying a lollipop during the fun.
Tribune photo by Mark Davis
Previous Next
Posted Thursday, August 20, 2020 8:25 am
By CJ Baker

The COVID-19 pandemic didn’t keep Park County residents from voting in this year’s primary election. A total of 8,807 local residents cast ballots between July 2 and Tuesday evening; it was the second-highest voter turnout for a primary election in Park County’s history.

More people than ever — 4,872 residents — voted early or cast absentee ballots, with another 3,935 people showing up at the polls on Election Day.

The overall number of voters was equal to about 38% of the voting age population, which was the best turnout since a record 9,560 people cast ballots in 2010.

Turnout was strongest among registered Republicans, who had multiple contested races to weigh in on. A total of 7,778 local GOP members participated, as compared to 783 Democrats and 246 unaffiliated voters.

Across the state, a record number of Wyomingites cast ballots. A total of 139,950 people voted, including 110,502 Republicans, according to the unofficial tally from the Wyoming Secretary of State’s Office. That was 141 more voters than the 2018 election and represented about 31.4% of the voting age population in the state, according to Census Bureau estimates.

The local election was different this year. In addition to encouraging absentee votes, Park County Clerk Colleen Renner opted to close traditional polling sites in Clark, the South Fork, Wapiti, Heart Mountain and Garland, due to concerns about social distancing and a shortage of election judges.

Renner said the voting went smoothly on Tuesday at the four consolidated polling places in Cody, Powell and Meeteetse.

“I really had no complaints,” the clerk said Wednesday, though she plans to break voters in four groups instead of three at the polling places to “keep the line down a little.”

Commission Chairman Joe Tilden, who voted at the Cody Rec Center, said he

“thought it went very smoothly; a lot of social distancing.”

However, Commissioner Lloyd Thiel said he heard “it took a lot longer to vote and it was closer quarters” at the consolidated polling sites, undercutting the goal of social distancing. One election judge, Jacob Dillinger of Powell, also told commissioners he thought the consolidated polling places were “confusing” and he heard “a lot of complaints from the various people.” Dillinger said he plans to resign from his job as an election judge following the general election.

He was among a group of about 20 people — including Park County Republican Party leaders and state Rep. Dan Laursen, R-Powell — who showed up at Wednesday’s commission meeting to object to Renner’s decision to keep the Clark, South Fork, Wapiti, Heart Mountain and Garland polling places closed for November’s general election.

Vince Vanata, a Cody resident and the secretary of the county GOP, has filed a formal complaint with Park County Attorney Bryan Skoric about the poll closures and he reiterated his objections on Wednesday. Vanata contends that closing the polling places makes it too inconvenient for voters and called Renner’s reasoning for the closures as “a variety of excuses.”

“The people have a right to vote in person. Many men and women have given their lives to guarantee that right. Also, the State of Wyoming has invested a lot of money in purchasing new voting machines to ensure accurate voting,” he said. “Now some of those machines are being mothballed because the county clerk failed to do due diligence in securing polling judges, failing to follow state statutes and failing to uphold her oath of office.”

Vanata said closing the polling places “is nothing but voter disenfranchisement.”

Wendy Annis, a Clark resident who filed the formal complaint alongside Vanata, also complained about the 40-minute drive from Clark to Powell. She said the Clark Pioneer Recreation Center could be set up for social distancing and said Clark residents would volunteer to man the polling place.

“We understand the county clerk’s had hard and scary decisions to make, but somehow Clark fell through the cracks,” Annis said, adding that the community is growing quickly.

“When you took that position, did you agree to uphold the law?” Kelleher asked the clerk.

“Did you uphold the law … when you did this?” Kelleher asked.

“No, you didn’t,” Kelleher charged.

At that point, the commissioners — who generally require all questions and comments to go through the chair — shut down the discussion.

“We’re not going there,” said Commission Chairman Joe Tilden. “This is a decision that’s been made [to close the polling sites].”

As Kelleher continued to protest, Tilden said the opinion of County Attorney Skoric is that Renner is “well within her right” to close the polling locations and had followed the law.

However, Skoric said in an interview on Wednesday afternoon that, “I have certainly not reached a conclusion” as to whether the county has “done what it needed to do” to shutter polling sites. Between state law and a recent directive from the Secretary of State’s Office that gave clerks some flexibility for at least the primary election, “things are obviously a little complicated on this one,” he said.

Skoric said he hopes to resolve the issue and the formal complaint next week.