Two hunt areas south of Powell have been listed as special Chronic Wasting Disease (CWD) focus areas. The Wyoming Game and Fish Department is looking for samples from deer hunters harvesting mule and … 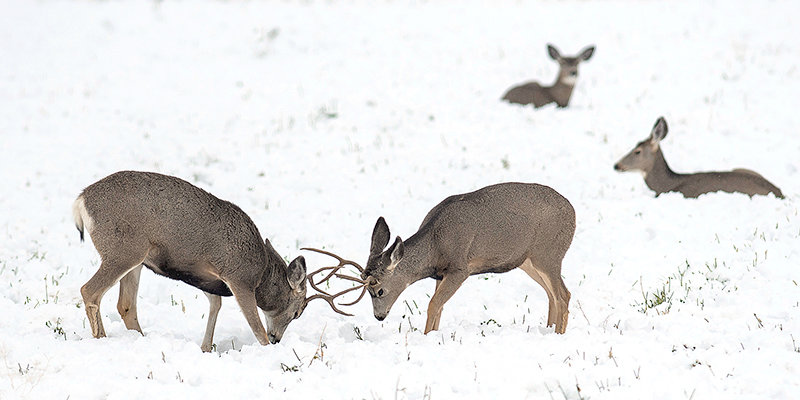 Two young mule deer bucks spar as does watch after an early fall snow during a previous hunting season. The Wyoming Game and Fish Department is currently targeting its research on CWD prevalence in mule and white-tailed bucks in the Greybull River Valley south of Powell.
Tribune photo by Mark Davis
Posted Tuesday, September 6, 2022 8:25 am
By Mark Davis

Two hunt areas south of Powell have been listed as special Chronic Wasting Disease (CWD) focus areas. The Wyoming Game and Fish Department is looking for samples from deer hunters harvesting mule and white-tailed deer from areas 124 and 165 in the Greybull River Valley.

CWD is a fatal disease that affects ungulates, like deer, elk and moose, by attacking their central nervous system. The prevalence of the disease in the two hunt areas is about 45%, according to department officials.

Wildlife biologists are in their third year of targeting the Greybull River herd and hope to have at least 200 samples volunteered by local hunters. The samples of lymph nodes will help the department better understand how it affects the health of the state’s deer and elk populations, said wildlife disease biologist Eric Maichak.

“If we can get enough samples, we’re able to focus our resources and get an estimate of prevalence within a short timeframe,” he said in a recent interview.

Hunter-submitted lymph node samples are crucial to managing the disease in wildlife herds, the department said in a press release.

“Game and Fish is requesting samples from herds we’ve not addressed in a while,” said Hank Edwards, Game and Fish wildlife health laboratory supervisor.

The department has tracked the distribution and prevalence of CWD since 1997.

Last year the department added Hunt Area 109 (west of Powell) to the list and has already added Hunt Area 143 (in Sublette County) this year. There are very few hunt areas in the state where the disease hasn’t been found.

In the Shoshone River herd unit, testing has found 35% of adult mule deer bucks have been infected with the disease. Bucks generally have higher rates of infection due to their larger ranges and higher contact rates with other deer. White-tailed deer have a higher rate of infection than mule deer, while elk have a much lower prevalence for the disease, around 2%, Maichak said.

There is no known treatment, but testing is quickly improving, said Dr. Samantha Allen, the state’s wildlife veterinarian. A promising new test called RT-QuIC uses nanoparticles of gold to help achieve fast results, but has yet to be approved by the Federal Drug Administration.

Surveillance has also improved understanding of how deer might catch the disease environmentally. The department has taken more than a million photographs using automated scout cameras of deer at 49 separate salt licks and seven water sites. The analysis of the photos may give a clue to the disease spread by saliva, feces, close contact or prions shed in the environment as the disease takes its course and after death.

Typically, an infected deer can live between two to four years seemingly unaffected. They look emaciated, drool and appear to be unaware of their surroundings in the short, final stage of the disease.

“Agencies need to really consider budget and staffing issues with increased testing for CWD,” she said.

Maichak hopes hunters will learn to remove lymph nodes to streamline the testing process. There’s a how-to video on the department’s CWD information website and biologists and game wardens are happy to demonstrate the process when asked.

They are targeting bucks for the research, but the department is happy to test any sample hunters submit. The U.S. Center for Disease Control has reported, to date, there is no strong evidence for the occurrence of CWD in people and it is not known if people can get infected with CWD prions.

“Hunters must consider many factors when determining whether to eat meat from deer and elk harvested from areas with CWD, including the level of risk they are willing to accept,” the CDC said in a recent publication.

Submitting a sample in the Powell area is easy, Maichak said. Besides convenient check stations during the any-deer season, samples can be submitted through Northwest College’s biology department, which has been collaborating with Game and Fish in an effort to test a higher percentage of hunter’s harvests while at the same time giving students real-world experience.

“We think it’s important that students get real, authentic hands-on experience,” said NWC Associate Professor of Biology Eric Atkinson when the college began the program.  “We’ve talked about this for years. Now there’s pressure to get at least 200 samples,” he stated.