Cooley was within three … 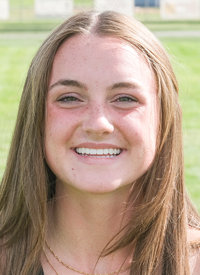 Cooley was within three seconds after the previous weekend in Worland, but was not confident about her time after rainy conditions at Olive Glenn Golf Club.

“I had already left the meet and thought I didn’t do it,” Cooley said. “Before the race we did not have any warmups, I did not feel very fast during the race. When I found out I broke it I was shocked, I thought it was something I was going to struggle with for the rest of the season.”

She said her teammates have been able to help her continually push herself in practice, as they have done all season.

“Everyone being there makes it more enjoyable,” Cooley said. “It is easier to come to practice every day and have a good time and improve.”

Taking a little pressure off her shoulders, Cooley now has her sights set on dropping the record even further down with just three meets left in the season.

She is hoping to get her time down into the 19:30’s by the end of the season, knowing that she could push that at either the Powell home meet this Friday or the state meet.

“I am hoping that we can get a crowd at our meet,” Cooley said.

That meet will begin with middle school races at noon, followed by junior varsity races at 1 p.m. and varsity races starting at 2 p.m. at Powell Golf Club.

Beyond this season Cooley is hopeful that she can continue to climb the rankings within the state, having two years to improve her time and hopefully push for a college scholarship.

Her teammate, fellow sophomore Kenna Jacobsen, is less than a second from joining her on the school record top-10 list.

Cooley hopes they can push each other until they are No. 1 and No. 2 on the list — while also helping the team challenge for a state title.