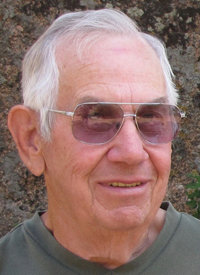 Clifford Roberts, of Powell, died on Sept. 13, 2022, following a short but intense battle with leukemia. He was 85.

Cliff was born in a log cabin in Kentucky in 1937. His life’s journey took him to Indiana, Missouri, Texas, California, Japan, Colorado, Oregon, and finally Wyoming, where he lived the last 14 years.

Cliff married Barbara in Missouri in 1958, and they were married almost 64 years when he passed away. They had four children, Mike, Pat, Sharon, and Jim.

Cliff was honorably discharged from the U.S. military after serving in the National Guard for a year, the U.S. Air Force for four years, and the Air Force Reserve for a year. He then worked 41 years in the automotive industry in Missouri and Colorado.

For his first five decades, Cliff was an avid camper, hunter and fisherman. He loved building his own camping and fishing gear and refinishing guns. Cliff was also an accomplished woodworker, and he was always building something for somebody. His home with Barb, as well as the homes of all his kids, have many examples of beautiful furniture and improvements he built.

A huge part of Cliff’s life was helping others. His kids remember him as the one parent everybody could count on to be there if something was needed in scouts, sports, or any youth activity. It was the same at church, and he also built projects for many, many people he encountered with a need. He was one of the hardest workers his family has ever known.

Cliff was an avid hiker. Even into his 80s he could be found on long hikes with Barb in the mountains, or on top of one. He climbed Heart Mountain several times, including once at age 81 with three generations of his and Barb’s descendants. He chugged up the mountain like he was 50. A group photo on the summit shows Cliff holding his great-granddaughter.

Cliff was preceded in death by his daughter Pat. He is survived by his wife Barb, son Mike (Paula) of Cody, son-in-law Tony Diangelis of New Jersey, daughter Sharon (Rich Crawford) of Colorado, and son Jim (Donna) of Washington state, eight grandchildren, and one great-grandchild.

Cremation has taken place, and a family gathering will be held at a later date.