After a lengthy discussion Monday, Powell city council members decided unanimously to sell two Gateway Drive lots for slightly under the appraised value to the only two companies who have shown … 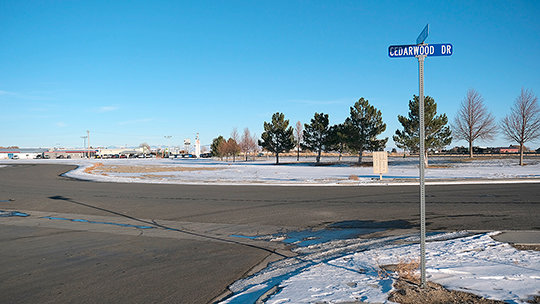 A view from the Gateway lot Yellowstone Electric had asked to purchase shows the lot Yellowstone Motors requested the city to sell to it. Monday night city council members agreed to go through the process to sell both lots to the individual companies at slightly below appraised value to support economic development.
Tribune photo by Zac Taylor
Posted Friday, November 25, 2022 8:38 am
By Zac Taylor

After a lengthy discussion Monday, Powell city council members decided unanimously to sell two Gateway Drive lots for slightly under the appraised value to the only two companies who have shown interest in the small lots.

Yellowstone Motors wants to buy the Gateway lot adjoining its dealership as a way to add its EV Hummer line, as owner Anthony Brownlee said.

Yellowstone Electric owner Zane Bennett told city council previously he would like to put a Level 2 EV charging station at the site to start, and possibly a coffee hut and connections for vendor trucks.

The Gateway Drive lots a local electric company and car dealership have asked to buy from the City of Powell were appraised at $40,000 apiece. The council members agreed to sell them at $32,000 apiece, plus incurred and closing costs.

The appraisals were a step in a process whereby the city could choose to sell the lots to the two businesses without having to go out for bids as a way to support community development.

City council had tabled a vote on how to move forward on selling the two lots at the last meeting due to two council members being absent from what Mayor John Wetzel said was a big decision.

The city will need to hold a public hearing after repeated announcements of the hearing to give people a chance to say whether they agree with the lots being sold to Yellowstone Electric and Yellowstone Motors as a way to further community development.

The city could have decided to bid both lots and for a time Monday night a number of council members said that would be better for the city to avoid concerns about a business buying the lot for less than the appraised value and then turning it around for a profit.

Council member Geoff Hovivian said he liked that course after Lesli Spencer suggested it as a way to avoid the city having to keep tabs on making sure the buyers did what they had said they’d do with the lots. But, after Wetzel said he’d prefer at least the lot adjacent to Yellowstone Motors to be sold individually as it would harm the dealership if it didn’t have the high bid for the land it’s planning to use for a new Hummer line, Hovivian noted that the city’s zoning would solve the issue.

“The only saving grace that we have if we do economic development is the zoning,” he said.

The land is zoned general business and the lots, while able to be connected to electric, would require a lot more infrastructure to be connected for sewer and water. Thus, council members agreed, it would limit what could be built there.

Selling lots for economic development is nothing new for the city, which went through the same process for the land purchased by Dairy Queen.

“I think this is really solid discussion,” Wetzel said. “I appreciate everybody’s concerns. I think protecting the citizens of Powell is great. But I also think growing the town is important as well.”