It is not uncommon for basketball teams to have busy weeks early in the season, but due to COVID-19 delays, the Northwest College women were forced to play four Region IX games in the season’s … 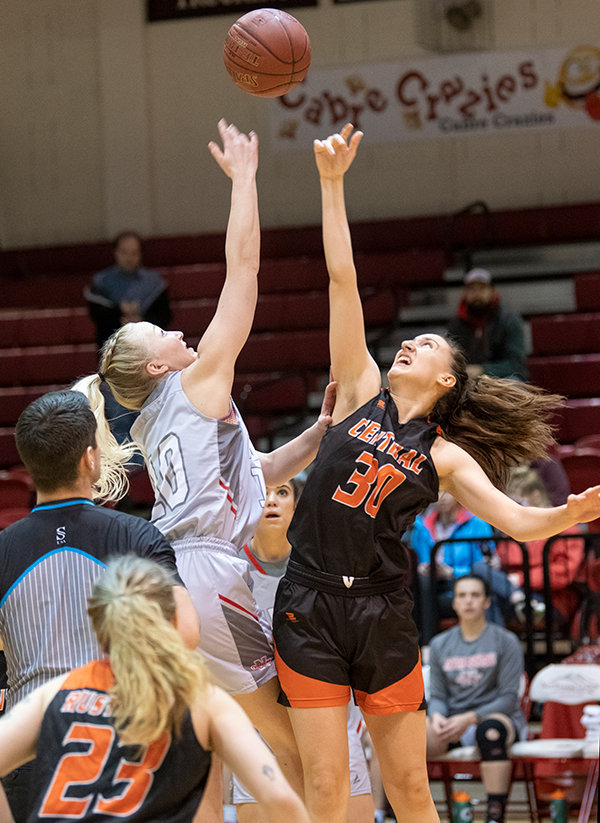 Trapper freshman Brenna Rouane gets the tip off Monday night, part of a busy week that featured four games. The Trappers topped Central Wyoming 72-44 after losing to them 80-72 just a few days earlier. The Trappers will take on Central Wyoming again at home at 2:30 p.m. Saturday.
Tribune photo by Carla Wensky
Posted Thursday, February 24, 2022 8:10 am
By Seth Romsa

It is not uncommon for basketball teams to have busy weeks early in the season, but due to COVID-19 delays, the Northwest College women were forced to play four Region IX games in the season’s final week.

The Trappers dropped a close 72-70 contest to Laramie County Community College at home on Feb. 16, lost 80-72 at Central Wyoming on Saturday, returned home and beat Central 72-44 on Monday, then lost at LCCC, 88-52, on Tuesday.

Northwest grabbed a 9-4 lead, but LCCC battled back and held the offensive advantage the rest of the first quarter to go up 22-16 going into the second.

The Golden Eagles extended their lead to double digits early, leading 26-16 with 7:29 left.

The Trappers reversed their fortunes, however, as they went on a 16-6 run to finish the half. The teams were tied at 32 at halftime after an LCCC buzzer beater.

The teams stayed close in the third quarter, with LCCC up 44-42 going into the fourth.

The final quarter continued the trend, as the two teams were tied at 55 with 5:30 left.

The Trappers went up by four just two minutes later on a pair of free throws by sophomore Kierra Cutright.

Cutright played strong in the fourth quarter with eight points, but was forced out after getting her fifth foul with 2:30 left. That left the Trappers without one of their top defenders and energy players down the stretch.

“It was huge,” Trapper head coach Lauren Davis said of losing Cutright. “Her presence on the court means a lot for us and whenever she goes out we need someone else to step up and be that for us.”

LCCC took advantage, outscoring the Trappers 10-7 over the final minutes, closing out the game at the free throw line.

With the defeat, the Trappers lost an advantage in the race for the No. 2 seed, but still had an opportunity to pick it up with victories over Central.

On Saturday in Riverton, the Trappers faced a must-win game against Central Wyoming (6-20 overall, 2-8 Region IX North) to stay atop the race for the No. 2 seed.

Northwest held a 16-11 lead midway through the first quarter, but Central outscored the Trappers 9-4 the rest of the way to pull even.

The Lancers started the second quarter strong, but Northwest led 38-35 going into the half.

Midway through the third quarter, the Trappers extended their lead to five points on a trey by freshman Kiana Quintero to make it 49-44.

Unfortunately for Northwest, Central continued to confuse the Trapper defense and the Lancers tied the game at 55 going into the fourth.

“They didn’t do anything we didn’t expect them to do,” Davis said. “We came out flat, and because of that they got the looks that they wanted.”

Central took a six-point lead four minutes into the final quarter. Northwest got within a single possession a couple times, but Central pulled away and stretched the lead to double digits, holding on for an 80-72 win. The Lancers were led by 33 points from Livia Knapp.

A quick turnaround met the Trappers as they returned home Monday for a rematch with Central. Northwest had the opportunity to remain in the race for the region’s No. 2 seed after LCCC lost to Eastern Wyoming.

The Trappers led 17-14 after one and started the second quarter on a 7-0 run to push the lead to double digits.

Central closed the gap to a single possession at 29-26 with 1:41 remaining, but Northwest finished the half up 33-26.

Northwest pushed the lead to 13 over the first seven minutes of the third quarter, as they continued to execute after Saturday’s disappointing loss. Following Knapp’s 33-point performance on Saturday, the Trappers held her to five points on Monday.

“We didn’t adjust, we just executed,” Davis said. “I think the girls realized what she [Knapp] was capable of and executed accordingly.”

Northwest took a 52-34 lead into the final quarter and outscored Central 11-2 over the first five minutes to push the lead to 27 points. The Trappers were able to cruise over the final five minutes and walked away with a 72-44 win.

Tuesday brought an opportunity to take the No. 2 seed on the final day of the regular season. The Trappers traveled to Cheyenne to take on LCCC in a game that was originally canceled due to COVID-19 but was rescheduled due to seeding implications.

“I think the girls were very exhausted,” Davis said. “It is hard mentally, physically and emotionally to play four games in a seven day span.”

LCCC continued the momentum from their early run and took a 43-20 lead into the half.

The second half was not any easier, as LCCC took advantage of their extra day of rest en route to a 88-72 win, dropping the Trappers from a potential No. 2 seed down to the No. 4 seed for the regional tournament.

Northwest now heads into the postseason on a rollercoaster of emotions. They will return home for a Saturday playoff game against a familiar opponent, facing Central Wyoming for the third time in a week.

The game will tip off at 2:30 p.m. as the Trappers try to advance to the Region IX tournament in Casper next week.

How will the Trappers adjust after their tiring week?