Back on track? Trappers end regular season with two wins

A difficult region schedule ended with a challenging final week for the Northwest College men’s basketball team, with three games in six days. The Trappers extended their losing streak with a …

Back on track? Trappers end regular season with two wins 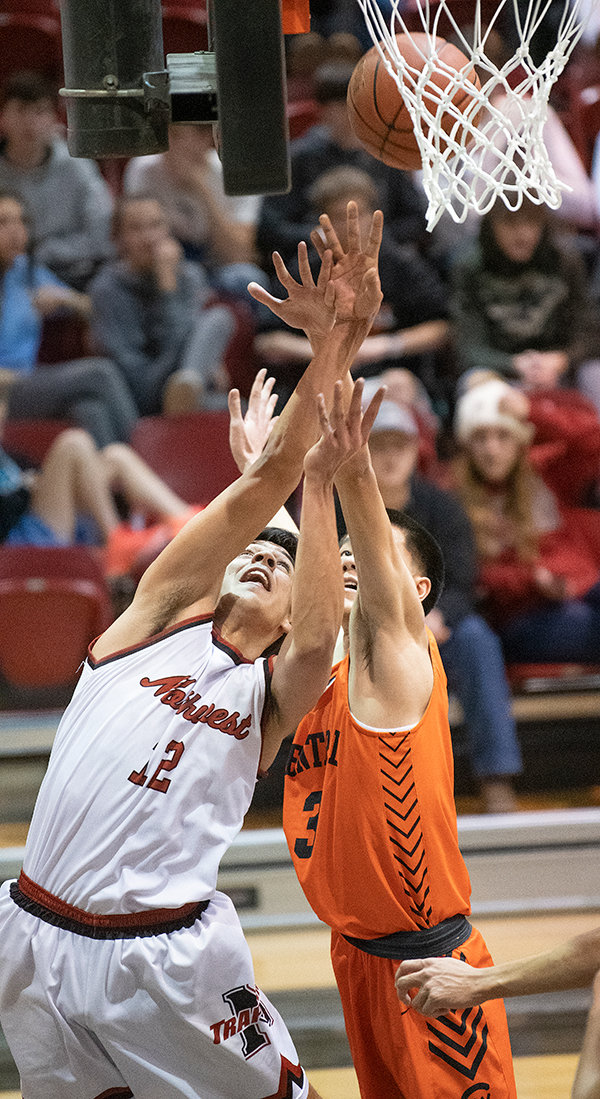 Trapper sophomore Gabriel Gutierrez battles Central Wyoming’s Steven Long under the basket to put up two points Monday night at the Cabre Gym. Coming back from an eight-point deficit, the Trappers were able to secure a 70-68 win in the final seconds of the game.
Tribune photo by Carla Wensky

The Trapper student section celebrates a 3-point bucket in the final minute of play Monday evening, moving NWC closer to the win.
Tribune photo by Carla Wensky
Previous Next
Posted Thursday, February 24, 2022 8:20 am
By Seth Romsa

A difficult region schedule ended with a challenging final week for the Northwest College men’s basketball team, with three games in six days. The Trappers extended their losing streak with a 84-77 home loss to Laramie County Community College, but then snapped it with wins over Central Wyoming on Saturday 95-86 and Monday 70-68.

The game did not start out strong for Northwest, as LCCC jumped out to a 14-3 lead.

The Golden Eagles pushed the lead to a game-high 16 points with 7:25 remaining as they hit 16 of 27 attempts from the field in the first half.

Northwest was able to close within single digits to end the half, however, as a jumper by freshman Juan Pablo Camargo made it 41-32.

Needing a fast start to the second half, Camargo and sophomore Gabriel Gutierrez pulled the Trappers within a point at 45-44 with 16:32 remaining.

However, Northwest was unable to reclaim the lead as LCCC continued to have an answer on the offensive end, pushing their advantage back to six points with 8:34 remaining.

Northwest continued to chip away behind the strong play of Camargo, as his battle down low created opportunities for other Trappers to score. An and-one by freshman Bryson Stephens made it a three-point game with 42 seconds left.

LCCC answered with a dunk on the other end and was able to make four free throws to finish the game on top 84-77.

“I do not think I have ever had a season where we have been unable to make these winning plays down the stretch,” said Trapper head coach Jay Collins. “Usually when you have them you still end up 7-3, 6-4 or even 5-5 in region play, but not 0-8.”

Camargo finished with a game high 32 points, despite being held scoreless in the final six minutes. Stephens put up 15 points and Gutierrez finished with 10 as the Trappers’ losing streak reached 10 games.

Heading back on the road on Saturday, the Trappers sought to create a little momentum as they took on Central Wyoming (8-17 overall, 1-9 Region IX North).

They held a 9-2 advantage after three minutes and appeared poised to grow the lead after Guttierez took a charge.

The Trappers went up by nine points multiple times before Central made a 14-1 run to take a 20-16 lead with 13 minutes left in the half.

Coming into the contest White was averaging 19 points a game, but Swenson and Oyeku held him to 12 points on 5-of-17 shooting from the field.

“All that credit belongs to Alan [Swenson] and Oluwaseyi [Oyeku],” Collins said. “They wanted the challenge and they stepped up.”

Northwest headed into the locker room up 47-41.

The Lancers came out strong in the second half, going on a 9-0 run over the first two minutes to take a 50-47 lead.

Both teams continued to fight, as Central maintained a one-possession lead entering the final 9:30.

Northwest finally grabbed the lead off a left-handed layup from Oyeku with eight minutes left, as the Trappers tried to finish their first region victory of the season.

They turned to Camargo, who finished down low to give the Trappers the lead for good.

Needing a basket of their own, Central turned to White on the offensive end.

“Everybody knew the ball was going to Jesse [White],” Collins said.

Swenson stole the ball from White, which led to a layup by freshman David Ayala on the other end to extend the NWC lead out to three.

“Alan [Swenson] stepped up and made the play,” Collins said.

The Trappers made free throws down the stretch and walked away with a win — their first since Dec. 12 against Williston State.

“Juan [Camargo] has been in a zone,” Collins said. “I think it was great for these guys to get a win again to know what that feeling is like.”

A quick turnaround led to a rematch with Central at home on Monday, as the Trappers tried to capture more momentum heading into their play-in game on Saturday.

Northwest again started out strong, holding an 8-2 lead after the first seven minutes and led 26-17 with 7:13 left in the half.

Central outscored the Trappers the rest of the way, however, as the game was tied 36-36 at the half.

Northwest held a slim lead out of the break before Central went on a 6-0 run to make it 50-47 in favor of the Lancers with 10:51 remaining. The Lancers pushed the lead to eight at 59-51 with 7:19 remaining, setting up an exciting finish down the stretch.

Another 3-pointer by Avila made it 68-67 with 27 seconds remaining.

Central then went to the free throw line for the bonus. The first attempt rimmed out, but an offensive rebound gave the Lancers another opportunity to go up by three points.

Both free throws missed the mark, however, and Swenson raced down the other end and found Avila for a layup that put Northwest ahead. A Gutierrez free throw finished off the scoring for a 70-68 win for the Trappers.

The Trappers again held White in check, as he finished with three points on 1-of-11 shooting.

“That was the key to both games,” Collins said of White’s low scoring.

The Trappers will now head back on the road for a Region IX play-in game in Torrington on Saturday to take on Eastern Wyoming (14-15 overall, 4-6 Region IX North) at 4 p.m.

The winner will then travel to La Junta, Colorado, to take part in the Region IX tournament at south region winner Otero College.