At the Flag Day Ceremony at the American Legion Hughes-Pittinger Post 26 in Powell, Wyoming, in June, I met Frank Cropanese. 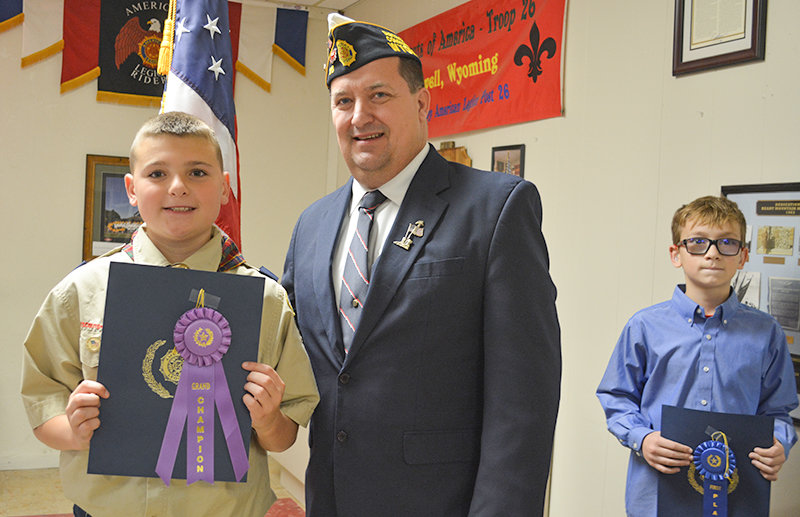 Wyatt Hill poses for a photo with Russell Stafford, the commander of American Legion Hughes-Pittinger Post 26 after winning the post’s recent fifth grade essay contest. Runner-up Gabe Leighton is seen at right. The youth were asked to research a veteran and write about their service, including the jobs they performed and places they went in the military.
Tribune photo by CJ Baker
By Wyatt Hill

At the Flag Day Ceremony at the American Legion Hughes-Pittinger Post 26 in Powell, Wyoming, in June, I met Frank Cropanese.

He was in the Army National Guard from 1984 to 1990, where he served as an artilleryman and truck driver. When he left the Guard he held the rank of sergeant. Then he joined the U.S. Navy as a seaman from 1990 to 1994. In the Navy, he served as a cook, and a firefighter. While in the military, some of the places Frank went to were Africa, Australia, Asia and South America. Frank served in Operation Desert Shield and Operation Desert Storm during the Gulf War in the early ’90s. Frank also served in Operation Restore Hope in Somalia, when the U.S. military helped the Somali people who were starving after rebel attacks destroyed their agriculture. Frank took pride in getting the job done when he served.

Since Frank served he takes pride in talking to people, bringing in good ethics, and trying to keep in shape. He is a proud member of the American Legion and Sons of the Legion for the past five years. He joined the Legion because he is a veteran and he likes to help other veterans who serve our community in a patriotic way.

I am inspired by Frank Cropanese for serving in so many military operations. He helped people in other countries, even though they were not American. Thank you for helping our country and for inspiring me. It is because of veterans like you, my dad and my grandpas that l want to be in the military some day.