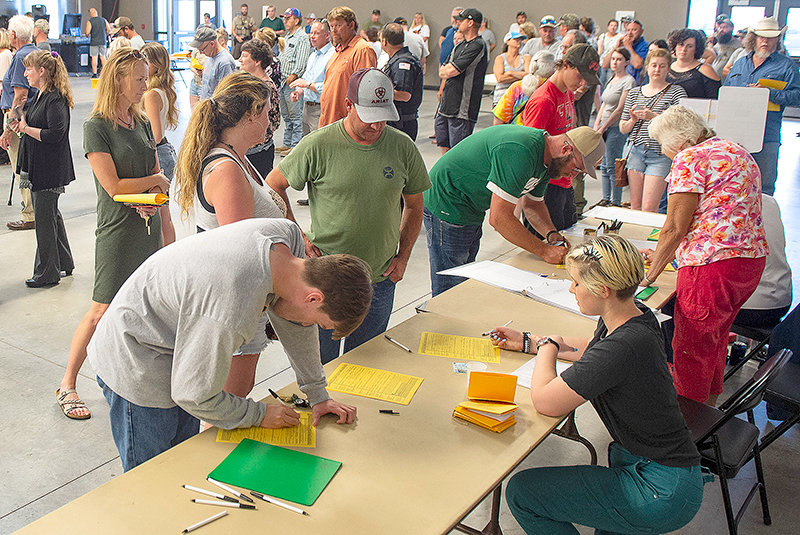 Voters stand in line to make address changes, register to vote, and switch party affiliation while they form long lines shortly before the doors were locked at 7 p.m. at Heart Mountain Hall in Tuesday’s election in Powell. Voters smashed the previous record for a primary.
Tribune photo by Mark Davis 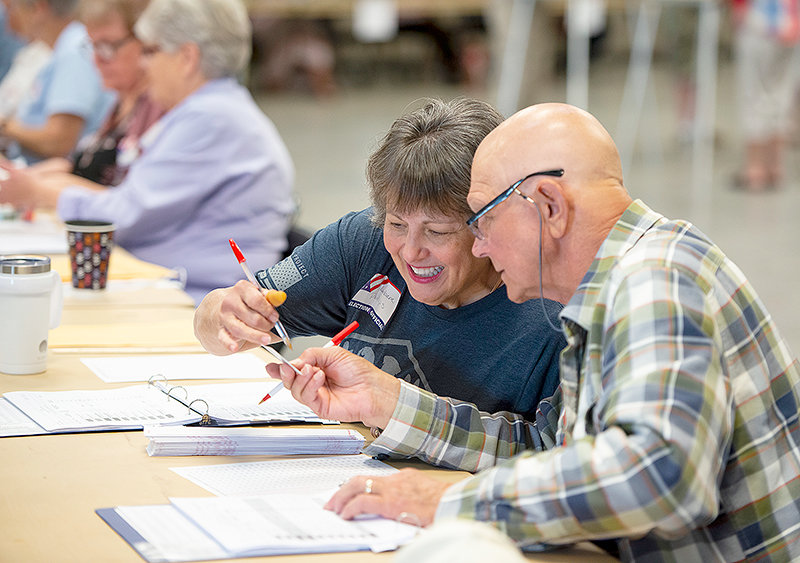 Election judges Rodger and Barbara Phillips check a voter’s I.D. Tuesday morning in the first year of the state’s new voter I.D. requirements. It was the couple’s first experience as judges, who thankfully brought extra pillows for the folding chairs during their 12-hour shift, making the job more bearable.
Tribune photo by Mark Davis
Previous Next
Posted Thursday, August 18, 2022 8:25 am

The contention that voter turnout would be restrained because people didn’t trust voting machines was completely bashed by Park County voters who flooded to the polls in record numbers for Tuesday’s primary election.

A record 12,366 voters found their way to the polls to cast ballots in the 2022 primary election Tuesday.

The previous Park County record vote in a primary election was in the off-presidential year of 2010 when 9,560 votes were registered.

Adding to the challenge of handling a huge turnout, some polling places were short-handed Tuesday, said County Clerk Colleen Renner. About 20 judges didn’t complete required training and another 10 didn’t show up to work Tuesday.

“The judges that were present had to work a little bit harder than they have in the past,” she said.

Renner said they like to rotate judges to keep them fresh through the day, but that judges had to “stay on the line the whole day,” due to the lack of bodies.

“We made it work,” Renner said.

She said the new voter ID law slowed the lines, but the effort seemed to be appreciated by voters.

“If anything, they were happy to have to show their ID. And I don’t believe there were any issues.”

There was one complaint of electioneering at Heart Mountain Hall at the fairgrounds in Powell, as an unidentified man attempted to pass out voting instructions for conservatives. But the man had left the premises shortly after being confronted by a Powell voter.

The law was changed recently, allowing for those wishing to hand out literature and speak to voters to be within 100 feet of the polls, rather than 100 yards. But doing so inside polling locations is forbidden.

“That is illegal. You’re not allowed to do that — not inside a polling location,” Renner said.