Wolves’ past, present and uncertain future

“I would say there’s a polarity that comes with wolves, either you like them or you really dislike them,” said Mike Jimenez, U.S. Fish and Wildlife Service’s wolf coordinator for the Northern Rockies.

Jimenez spoke at the Cody museum on …

Wolves’ past, present and uncertain future 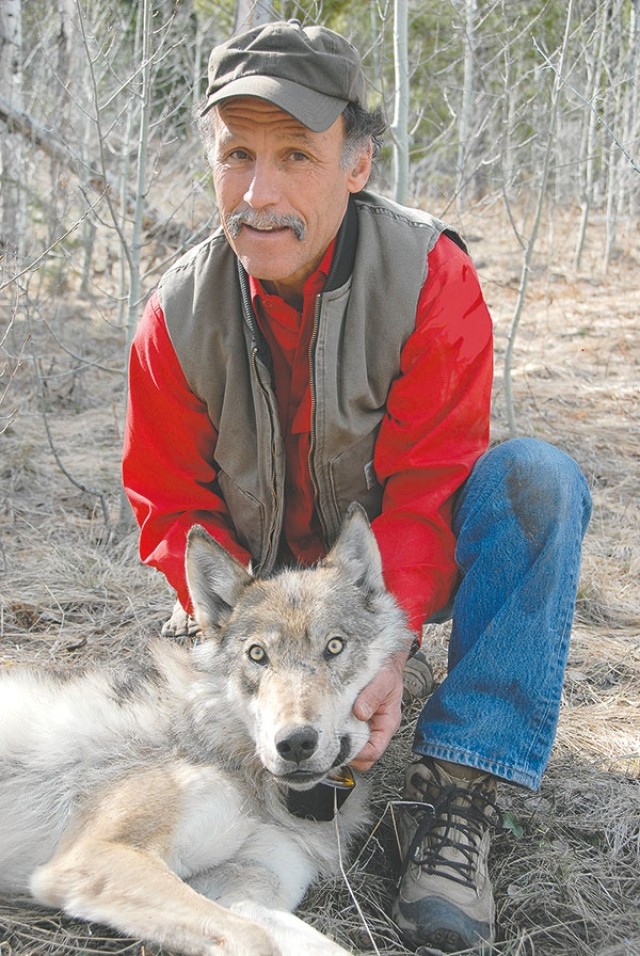 Although the future of wolves in Wyoming is uncertain due to the latest court rulings, the animal’s past and present were outlined by a federal official at the Buffalo Bill Center of the West last week.

“I would say there’s a polarity that comes with wolves, either you like them or you really dislike them,” said Mike Jimenez, U.S. Fish and Wildlife Service’s wolf coordinator for the Northern Rockies.

Jimenez spoke at the Cody museum on Oct. 2, an event that was scheduled before a federal judge placed Wyoming’s wolves back under federal protection. He urged people to look at the issue from the opposing view as well as the one they held.

“Try to imagine what the other side is thinking as strongly,” Jimenez urged.

“So I would say the whole context of managing wolves and resolving these kind of conflicts is hitting a balance point where you can hit and balance both those opinions and have a viable population of wolves that has minimal impacts on different parts of the public,” he said.

The Endangered Species Act is not a tool to turn the clock back, according to Jimenez. Rather, it is designed to prevent the extinction of a species. Once the species is recovered, management is transitioned back to the states, Jimenez said.

The gray wolf was listed in 1973. In 1978, there were only a couple hundred wolves in Minnesota and Michigan, and they were believed to be the only ones in the entre country

In the mid-1990s, 60 to 70 wolves spilled out of Canada into northwestern Montana, he said.

The canines were allowed to

expand outside those areas under the protection of the Endangered Species Act, Jimenez said.

The original recovery goal was 300 wolves and 30 breeding pairs to be divided evenly in Idaho, Montana and Wyoming.

As part of the reintroduction, the livestock industry was not to suffer disproportionately due to wolves, he said. The Fish and Wildlife Service pledged there would be no land use restrictions, no restrictions on livestock and no changes in grazing practices, roads or mining, Jimenez said.

By 2013 there were more than 320 packs with at least 70 or 80 breeding pairs in the Northern Rockies, Jimenez said.

By the end of the year, Yellowstone usually has 100 wolves. Today there are 1,600 to 1,700 wolves in the Northern Rockies amid multiple use such as livestock production, minerals, other wildlife and human recreation.

“That’s the ecological challenge,” Jimenez said. “How to maintain public tolerance on wolves on that kind of multiple management.”

Once recovery was complete, Fish and Wildlife could say the canine was recovered and the impacted states could develop their plans to maintain those recovery goals, Jimenez said.

The federal government would “drift off into the sunset.” That has not happened.

Turning it over to states

Making the transition to state control is very difficult, he said. Some wanted lots of wolves and some wanted very few.

“People push very hard to get their perspective across,” he said. “Whether you like it or not wolves are back on the landscape in the Northern Rockies.”

On Sept. 23, U.S. District Judge Amy Berman Jackson rejected Wyoming’s wolf-management plan that said wolves could be shot on sight across most of the state while creating a trophy zone in northwest Wyoming with a season that was set to open Oct. 1.

A week later, Jackson denied requests from Wyoming and others to change her decision that reinstated federal protections for wolves in Wyoming. Jackson said from the bench on Sept. 30 that Fish and Wildlife shouldn’t have accepted Wyoming’s non-binding promise to maintain at least 100 wolves and 10 breeding pairs outside of Yellowstone National Park and the Wind River Indian Reservation.

During a question-and-answer session following Jimenez’ lecture a member of the audience asked if the predator zone was unique to Wyoming.

The media picks up on “shoot on sight” very quickly, Jimenez said.

In the predator zone, wolves get into a lot of trouble killing livestock, he said.

“Did it (predator zone) affect the wolf population in the Northern Rockies,” was Jimenez’ rhetorical question. “Not at all. And the population continued to grow.”

According to Wyoming Gray Wolf Recovery Status Report Jimenez drafted in 2011 (the last full year prior to state management of wolves in Wyoming and the implantation of its predator zone), wolves killed 35 cattle, 30 sheep, one horse and one dog, said Maggie Howell, Wolf Conservation Center director in Salem, N.Y., stated in an email Oct. 7

“We (Wolf Conservation Center) recommended rules, similar to those in place that are now working in Oregon, to encourage ranchers to enact proactive nonlethal measures to avoid the very conflict that leads to controversial management plans like a predator zone,” she said.

“It has been demonstrated that the number of depredations in Oregon has decreased dramatically, Howell said. “In fact, the state has not killed wolves in more than three years. If Wyoming is truly committed to maintaining a sustainable wolf population in the state, these rules should be a welcome solution to the myriad of problems it faces in the public forum.”

If wolves are born in an area with livestock they may hunt or test livestock vulnerability, Jimenez said.

Most wolves are not involved in chronic livestock depredation with 20 percent executing one or two killings per year. A very small percentage attack livestock regularly. While listed, cattle-killing wolves were killed by Fish and Wildlife or the U.S. Department of Agriculture’s Wildlife Services, Jimenez said.

“We know wolves go after things that are available and vulnerable,” he said.

“Even though wolves are back under the ESA, wolves that chronically kill livestock will be removed,” Jimenez said in an email Oct. 7. “The USFWS can issue a shoot-on-sight permit to the livestock producer or we will kill offending wolves through agency control.”

Wolves prey on vulnerable elk, deer and moose populations. That causes conflict with hunters, according to Jimenez.

For example, in 2013 in Wyoming, 99 wolves were killed. Yet the population by the end of the year was 306, Jimenez said.

Jimenez said he didn’t believe Fish and Wildlife had publicly stated any official stance concerning Jackson’s ruling or what legal steps should be taken.

“That’s probably as much as I can offer you,” he said.

However, he said he felt Wyoming was doing a good job managing wolves.

“We think wolves should be delisted, they should be managed by states,” Jimenez said. “There’s not a threat to wolves in the lower 48.”