On March 19, the Wyoming Livestock Board sold the horses to the highest bidder, Bouvry Exports Calgary, Ltd., for $1,640. Bouvry maintains a slaughterhouse in Canada.

The horses were then shipped to Shelby, Mont. Of the 41, four colts were sold … 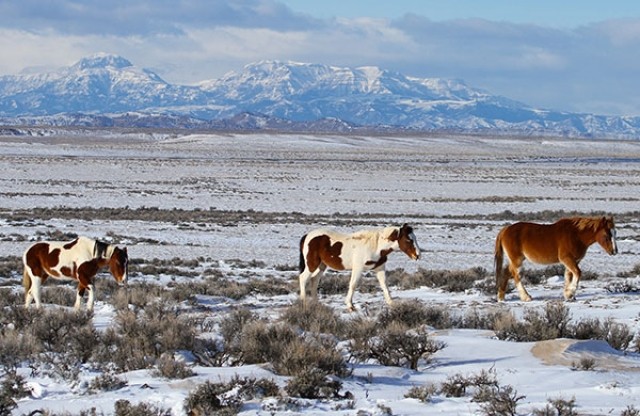 Wild mustangs from the McCullough Peaks Horse Management Area take a winter stroll with Carter Mountain in the background. These horses belong to Tecumseh’s, Medicine Hat’s and Tyke’s bands. Those are the names of some of the lead stallions but they are not pictured here. These horses tend to roam the south end of the 109,000-acre horse management range, which is managed by the Bureau of Land Management office in Cody. None of these horses were part of the BLM-organized roundup.
Photo courtesy Kristi Staebler
Posted Thursday, May 1, 2014 2:33 pm
By Gib Mathers

Nearly half the wild horses that were headed for slaughter following a roundup in March were rescued from the slaughterhouse.

On March 18-19, under Bureau of Land Management supervision, 41 horses were rounded up using a helicopter near Sheep Mountain north of Greybull. The animals were turned over to the Wyoming Livestock Board.

On March 19, the Wyoming Livestock Board sold the horses to the highest bidder, Bouvry Exports Calgary, Ltd., for $1,640. Bouvry maintains a slaughterhouse in Canada.

“I do not know who bought them,” a Bouvry manager who declined to identify himself said Wednesday. “The other 23 went to slaughter.”

The manager said the Wyoming horses were 2-year-olds and colts.

There is a big market for horse meat in Europe and Asia, he said.

Ginger Kathrens, board member of the Cloud Foundation, a wild horse advocacy group based in Colorado Springs, Colo., remained dubious of the rescued horses’ origins.

Typically following a roundup, the bureau conducts adoptions to sell the horses.

At adoptions, bidding per wild horse starts at $125. The average price is around $400. Although she can’t verify it, she heard the 14 Shelby horses sold for $800 each, Kathrens said.

Horses for slaughter are sold at a cost per pound. The foundation hoped to rescue the horses. “We had a buyer for all 41 horses at the going per pound rate,” Kathrens said.

In Europe horse meat sells for around $20 per pound, according to American Horse Meat.com.

In February the bureau published a Notice of Intent to Impound, in area newspapers and post offices, but it did not say what “unauthorized livestock” was to be impounded or where.

She didn’t know of the roundup until it was over, Kathrens said.

Fazio would like to see a similar arrangement with agencies providing wild horse advocacy groups the opportunity to purchase the captured horses at a maximum price of $100 per head.

That outcome results in a mixed emotional bag for Fazio, whose goal has been to prevent horse slaughtering in Wyoming.